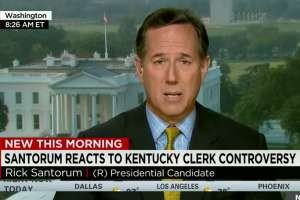 Appearing Friday on CNN's New Day, Santorum told host Chris Cuomo: "What Kim Davis did, in my opinion, was heroic."

"I commend her for standing up for her principles. Putting her in jail is ridiculous. It is an extreme position," he said.

Santorum, an outspoken opponent of marriage equality, said that the Supreme Court "acted unconstitutionally" when it declared that gay couples have a constitutional right to wed.

"Why are we putting someone in jail because they have a religious exception?" he rhetorically asked.

(Related: Hundreds rally in support of Kim Davis outside jail.)