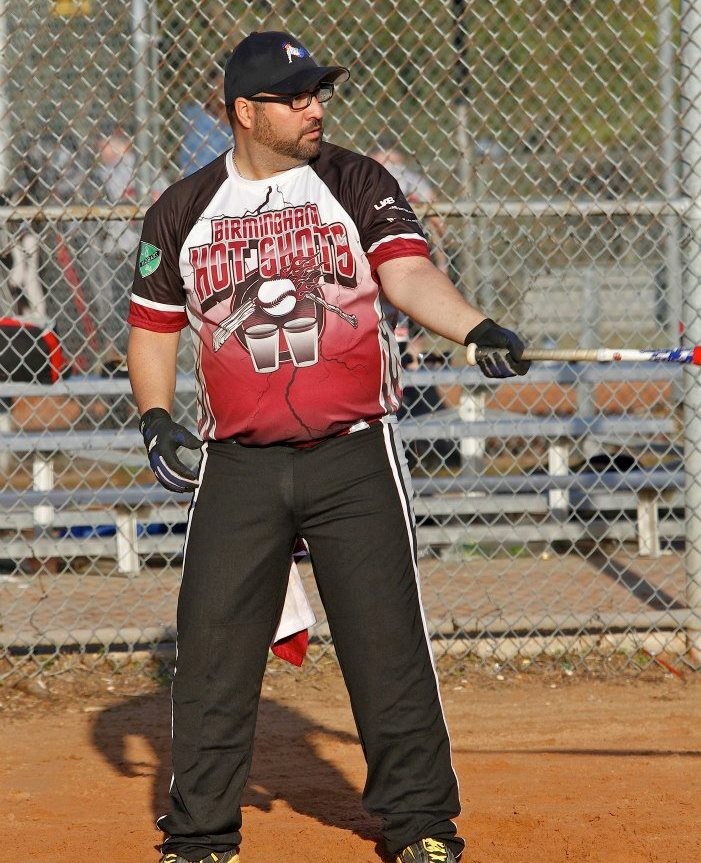 'While we all want to win, I think the Gay Softball World Series experience is something that can’t be explained or written on paper.'

Jack Neilsen is celebrating his 10th anniversary as a player in the annual Gay Softball World Series, run by the North American Gay Amateur Athletic Alliance (NAGAAA), as pitches are thrown and bats swung at the 2015 event through Aug. 22 in Columbus, Ohio.

Neilsen, 40, who lives in Chicago's Andersonville neighborhood, has been playing gay softball for 18 years – six years in Detroit and the last 12 for the Chicago Metropolitan Sports Association (CMSA). He also has been the commissioner of the CMSA Open Sunday Softball League for eight years, plus a coach for various teams.

"This (season), I have gone back to coaching and managing, with the national organization, (NAGAAA), making some player rating and divisional guideline changes, I opted to build a new team and participate in the B-Division," he said. "As the main pitcher for our team it's been a growing and learning season. I can honestly say the group of guys that I had play this season has been one of the most memorable for me. Everyone (on the team) truly wanted to play ball, have fun and if we win we win, if not we are out doing something we love.

"(As league commissioner), this role entails more than just being the face of the organization. You are working with umpires, handling complaints, verifying registrations, promoting the league, as well as attempting to make sure everyone is out playing and having a great time. It can be quite challenging at time, but I do this for the love of the sport and it is my opportunity to give back to my community."

Neilsen also is giving back to the game on the national level, too. He is the Business Development Director for NAGAAA, thus, he is responsible for bringing in new partners to align with the prestigious, multi-day tournament that dates back to 1977 and this year features 184 teams from across the U.S. and Canada, competing in four talent-based divisions and a fifth (Master's) for players age 50 and older.

Neilsen was first elected to the NAGAAA Board at its annual Winter Meetings in Minneapolis in 2012, for a two-year term. His current term will come to an end in 2016 at that year's Series, held in Austin, Texas. Neilsen is hoping to stay on the Board at least through 2018, he said.

"Every day (on the NAGAAA Board) is a different day, that's for sure," he said. "Being part of the NAGAAA Board has been an amazing opportunity for myself to grow and develop as a person. Learning the ins and outs of the Gay Softball World Series, meeting the new people, celebrating the LGBT community in sports ...I can honestly say that I couldn't ask for anything more."

After all, he has a decade of Series memories – and even a championship on his resume.

Neilsen played for Hydrate Heat in his first Series, held in San Diego in 2005. "We had 11 (players who) were able to make the tournament; (we) played our hearts our all week and made it to Championship Saturday. The friendships made on that trip (in 2005) still hold a special place to me."

In 2006, Neilsen's D-Division team (Jackhammer Heat) was the champion – and that's when he made a promise and commitment to bring the Series back to Chicago. The formal pitch was made for Chicago at the 2009 Series in Milwaukee, and Chicago was named the host city for the 2011 Gay Softball World Series.

"My favorite highlight will always be walking onto the stage at Opening Ceremonies at Navy Pier in 2011, seeing the sea of people applauding the amazing group we had put together to pull off Series 2011 – Chicago," Neilsen said.

Neilsen said his D-Division championship is still vivid, years later. "I remember us doing some batting practice before the Championship game on that Saturday," he said. "Lori Condie gathered the team around and gave one of the most motivational speeches I've ever heard from anyone. I cherish that memory of us huddled around listening to her and the wisdom she spoke. I also will never forget the last pitch being thrown and realizing, oh my God, we just won the Gay Softball World Series."

The celebration was emotional, to put it mildly.

Chicago first played host to the Gay Softball World Series in 1983 – and the Chicago Sidetrack team was the champion.

In 1988, the Series broke in two divisions, and expansion has continued. The first-ever Master's Division was held at the 2011 Series in Chicago – and the Chicago Sidetrack Classic team claimed the title.

Chicago has also won championships in 2009 (Spin Cougars in B-Division), 2003 (Cougars in C-Division) and 2002 (Little Dog Properties in D-Division).

"Honestly, it's not just the Gay Softball World Series that is special to me; it is the North American Gay Amateur Athletic Alliance (NAGAAA) as a whole," Neilsen said. "This organization has given me so much as a person, allowed me to shine, introduced me to so many wonderful individuals, and has given me an outlet to continue participating in sports. The GSWS is our 'Family Reunion. It's the time we get to see each other (and) celebrate the LGBT sporting community."

"I think, if everything clicks for (the Chicago) teams while they are at the Gay Softball World Series, they will do well," Neilsen said. "While we all want to win, I think the Gay Softball World Series experience is something that can't be explained or written on paper. I truly want each of the Chicago teams to excel and do the best they can, win or lose, we are still proud of each and every player for making it to the (Series)."

Neilsen, who works as the Media Center Office Manager for Advocate Health Care, also has had his hand – and a dress – in the popular pageant world.

"Ahh, the 'other side' of me," he said, laughing. "I always tell individuals I try to fit into all aspects of the LGBT community. I actually did perform when I lived in Detroit. When I moved to Chicago that just was not part of who I was any longer," though his alter ego has been known to come out of retirement for a benefit here and there.

Neilsen met the late, great Tajma Hall in July, 2002. Neilsen moved to Chicago that October and Hall hit the Windy City in November. "Instantly we became the best of friends," Neilsen said. "I would travel with her to shows, help out with costuming, talent ideas, etc. Looking back, I think it was my way to stay involved in the art form without having to actually perform."

Through Taj, Neilsen became a pageant judge and more.

"I was broken as she was my best friend, my sister," Neilsen said. "I've been blessed from our relationship to have so many doors opened for me on the pageantry level and have been around the country this year judging many national pageants, including the 30th Miss Gay USofA, Miss National Showgirl, Miss National Showgirl at Large, Miss Sapphire as well as a host of preliminaries to the nationals."

Ross Forman has covered the LGBT sports scene, both locally and nationally, for more than 10 years. He also has written business profiles, feature stories and on-deadline news stories. Ross will be profiling members of the Chicago LGBT community on a continuing basis for ChicagoPride.com. Anyone with a story idea, or wanting to be profiled, can contact Ross at: Rossco814@aol.com