Jake Shears on his 11-year relationship with Chris Moukarbel: Keep the switch on 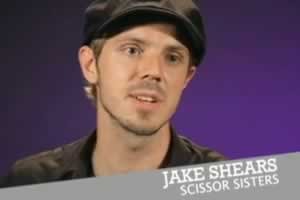 In an interview with gay glossy The Advocate, Jake Shears discussed his 11-year relationship with director Chris Moukarbel.

The 36-year-old Shears is best known as the lead male singer for the group Scissor Sisters.

He currently stars as Greta in a new production of Martin Sherman's landmark 1979 play Bent, which is playing at the Mark Taper Forum in Los Angeles.

Shear said that the play, which tells the story of two gay men who fall in love in a concentration camp in Nazi Germany, is "about all those who came before us."

"And all this that we have now is because we're really standing on the shoulders of others who suffered a lot and who are not alive to see what's happened," he said.

"It's important to remember that there were many here before us and that it's been a long haul and it still is – it's still a long haul for a lot of other people around the world who don't really have as much freedom as we do."

On the longevity of his 11-year relationship with director Chris Moukarbel (Sex On), Shears said that the secret was "keeping the switch on."

"It's just like – we just get on great," he explained. "We're both creative in our own ways, and we're just really lucky to have found each other. We have an amazing rhythm to our relationship, you know? It works, and we're in it for the long haul."