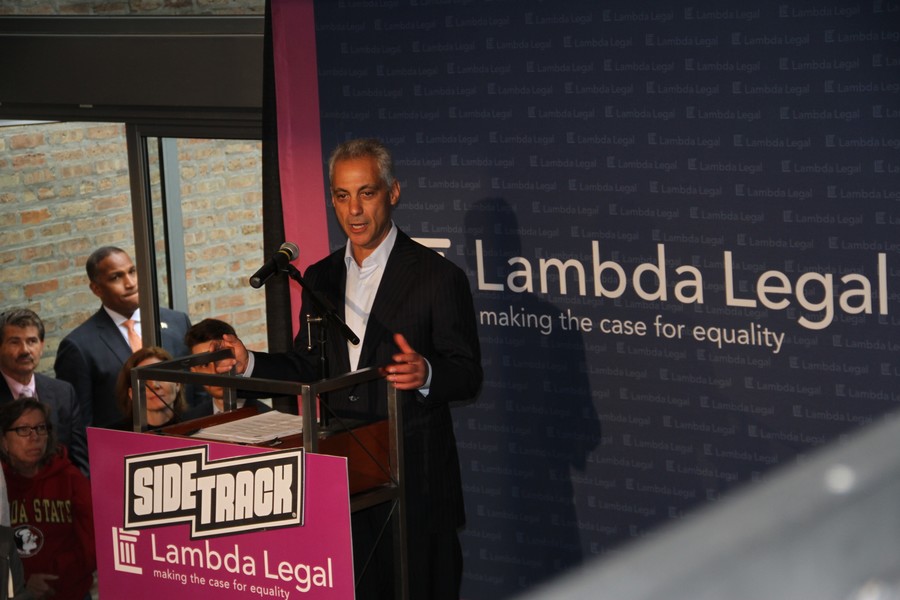 Chicago, IL - Ald. Tom Tunney was working out Friday morning when he was approached and given a random hug. He knew why.

Art Johnston, meanwhile, was at home Friday morning, with his television fixed to MSNBC, as always. He heard the announcement, albeit a couple minutes after it actually was made, and immediately called out for his longtime partner Jose "Pepe" Pena to join him.

State Rep. Greg Harris woke up Friday and quickly, almost immediately, checked out the SCOTUS blog. He was expected a favorable announcement regarding national same-sex marriage, though admittedly was expecting clauses or stipulations to the announcement. None of that happened – just full marriage rights for all Americans, in all 50 States.

From the noted and noteworthy in and around Chicago, to the average LGBT in the city, suburbs, around the state and extending from coast to coast and border to border, the cheers were as loud as ever as. A divided Supreme Court on Friday ruled that same-sex couples can marry nationwide, establishing a new civil right and handing gay rights advocates a historic victory. In the 5-4 ruling, Justice Anthony Kennedy wrote for the majority with the four liberal justices. Each of the four conservative justices wrote their own dissent.

By mid-afternoon Friday, the place to be within Chicago's gay community was Sidetrack: The Video Bar, in the heart of Boystown along North Halsted Street, as local leaders, politicians alike sounded off on the victory – then toasted with champagne.

Mayor Rahm Emanuel addressed the crowd, as well as State Rep. Greg Harris and others in the 30-minute lovefest for gay rights.

"We will no longer have gay or straight marriage in America; only marriage," Emanuel said, drawing cheers from the crowd of about 200 packed into the glass bar at Sidetrack, with about 100 more watching and cheering in the main bar.

"It's been a journey from Stonewall to (the) Supreme Court," Emanuel said.

Johnston also spoke to the gathering, as well as Sidetrack general manager Brad Balof and Jim Bennett, the Midwest Regional Director for Lambda Legal, and others.

Emanuel singled out Harris, noting that he has "never given in (or) given up."

Harris wore a rainbow-colored lapel pin, given to him a few years ago at a college gay-straight alliance. "It's been a journey that's involved so many people across our state, across our country," he said.

Tunney said after the press conference that Friday marked the greatest day in history of LGBT rights, without question, "but we won't understand the full impact of this decision and (its) ramifications for a number of years."

Tunney admitted he was "still in shock."

Ald. Deb Mell attended the Sidetrack festivities. "Like everyone else, I was completely struck; I couldn't believe," the announcement. Mell said she was "really grateful" to everyone who worked for the cause.

Longtime LGBT activist Pat Ewert was, understandably, fighting an internal emotional battle Friday at Sidetrack, knowing her longtime partner Vernita Gray passed away in March 2014. Ewert said Gray "would have been up on that bar, dancing around ...she would have loved this day."

Johnston, ever emotional and always the fighter for equality, tagged Friday as "an amazing day." He always dreams big, and admits he does. Still he said the announcement was "remarkable."

Especially with a throng of politicians proudly walking into Sidetrack, followed by TV crews from all local TV stations, something he Johnston admitted would have been "political suicide" decades ago. "That change unto itself is remarkable," Johnston said.

"Sidetrack is excited that the Supreme Court gave us this big win to kick off Pride Weekend," Balof said. "They have shown that when equality wins, everyone wins."

Anthony DiFiore of Chicago smiled at the timing of the SCOTUS announcement in conjunction with this Sunday's Chicago Pride Parade, not to mention the three Neverland parties he is promoting across Chicago. He's certain this will be a "magical" weekend.

Austin Baidas of Chicago said Friday he was "so excited," especially for his uncles who, after 30 years together, got married a year ago in Chicago. "Now their marriage will be respected in their home state of Michigan and throughout the country," Baidas said.

"After the work of (former) Gov. (Pat) Quinn, Rep Harris, Sen. (Heather) Steans and many activists over the past couple years to pass marriage equality in Illinois, it's great to see the rest of the country join us in recognizing all relationships."

Paul Ketz of Chicago admitted that, while growing up, "all I wanted was to be comfortable in my own skin and be accepted for who I am." He admitted that, "marriage equality didn't seem possible in my lifetime."

Now Ketz can marry anywhere in the 50 States.

"The speed at which we have achieved gay rights is overwhelming and I am excited to celebrate this leap forward with my friends before turning to the other important remaining work, like trans rights, immigration equality and discrimination laws," Ketz said.

Modesto "Tico" Valle of the Center on Halsted said today was "one more step forward," but noted that "we have some much more to do to realize full equality."

"We must end LGBTQ youth homelessness; we must make sure our trans family is recognized and counted and then maybe we can celebrate. Our LGBTQ movement continues to advance – congratulations to all who made this day possible," Valle added.