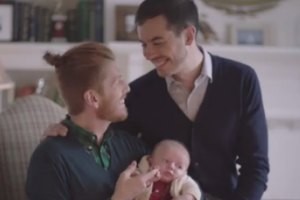 Christian conservative group One Million Moms is urging its followers to take action against Tylenol over a gay-inclusive campaign.

The campaign, #HowWeFamily, debuted earlier this month with a gay-inclusive ad, which features various couples, including a lesbian couple and a male couple with their baby.

"Family isn't defined by who you love, but how," a female announcer says.

"Tylenol is glorifying all modern family types by stating a family is based on love not traditional marriage, and then showing gay couples with their children," One Million Moms said in an action alert to members. "One Million Moms believes family is based on love, but this does not justify normalizing sin. 1MM does not agree with the need for Tylenol to support same sex marriages or couples."

"[Tylenol] should not be highlighting who is attracted to whom or who sleeps with whom. This is a marketing decision Tylenol will regret."

One Million Moms is asking its members to call on Tylenol to ditch the campaign and remain neutral in the culture wars.

"Also, let Tylenol know that continuing to air this ad and other offensive advertisements in the future will force your family to make the decision to no longer purchase Tylenol or Johnson & Johnson products," One Million Moms added.