Marco Rubio: Being gay is not choice 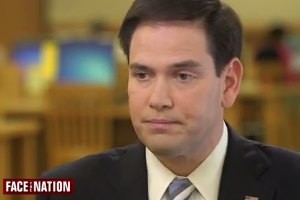 Florida Senator Marco Rubio said Sunday that he does not believe being gay is a choice.

In a Face the Nation sit-down interview with Bob Shieffer, Rubio, a candidate for the 2016 GOP presidential nomination, was asked: "You have said you're against gay marriage. Do you think that homosexuality is a choice?"

"It's not that I'm against gay marriage," Rubio answered, "I believe the definition of the institution of marriage should be between one man and one woman.States have always regulated marriage. And if a state wants to have a different definition, you should petition the state legislature and have a political debate. I don't think courts should be making that decision. And I don't believe same-sex marriage is a constitutional right."

"By believing gays [are] born that way, Rubio grants anti-genetics credibility to gayness as the equivalent of race," he tweeted. "Not the guy."

Last week, Rubio said that he would attend the same-sex wedding of a loved one, despite his opposition to marriage equality.