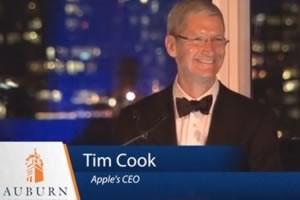 In a Washington Post op-ed, Cook joined a growing chorus of tech leaders who have criticized passage of such a bill in Indiana. A similar bill in Arkansas is expected to head to the desk of Governor Asa Hutchinson after lawmakers reconcile language in versions approved by the House and Senate. Neither state includes sexual orientation as a protected class in its civil rights laws. Critics argue that without those protections in place, the laws will allow businesses to discriminate against members of the LGBT community based on religious beliefs.

"These bills rationalize injustice by pretending to defend something many of us hold dear," Cook, who is openly gay, wrote."They go against the very principles our nation was founded on, and they have the potential to undo decades of progress toward greater equality."

"At Apple, we are in business to empower and enrich our customers' lives. We strive to do business in a way that is just and fair. That's why, on behalf of Apple, I'm standing up to oppose this new wave of legislation – wherever it emerges. I'm writing in the hopes that many more will join this movement. From North Carolina to Nevada, these bills under consideration truly will hurt jobs, growth and the economic vibrancy of parts of the country where a 21st-century economy was once welcomed with open arms."

"This isn't a political issue. It isn't a religious issue. This is about how we treat each other as human beings. Opposing discrimination takes courage. With the lives and dignity of so many people at stake, it's time for all of us to be courageous," he added.