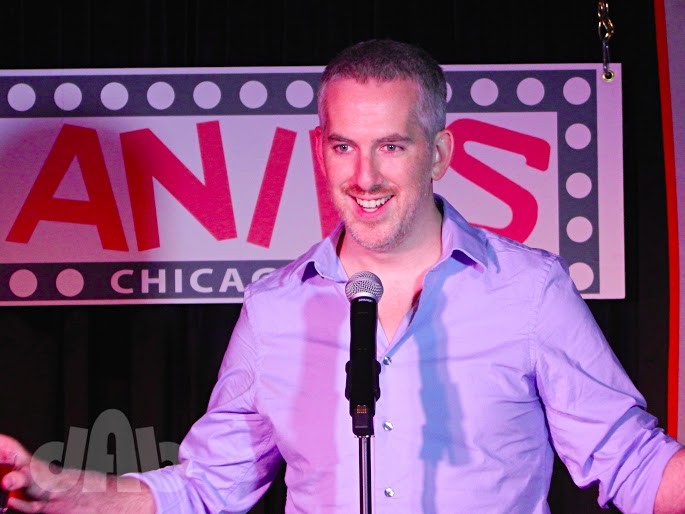 The Rainbow Connection Comedy Tour is taking off once again. Starting on Friday, March 20 in Madison, Wisconsin and continuing through St. Paul, Minnesota, Des Moines, Iowa and ending in Chicago on Wednesday, March 25.

The Rainbow Connection Comedy Tour is a full-spectrum standup comedy tour from the creator of Stand Out: The National Queer Comedy Search, which was presented by the Advocate magazine and Absolut Vodka. By combining the comedic talents of gay, lesbian, bisexual trans and straight comedians, we showcase the rainbow of queer comedy. The cast believes this inclusion reflects the diversity of our community and in turn welcomes the diversity of our audience members. Touring multiple cities, the shows will feature Adam Guerino, Marla Depew, Dina Nina Martinez, Rachel McCartney and Krista Atkinson.

To talk about what you can expect from the show, the cast talks about what they enjoy (or don't) about a diverse comedy show by all answering the question, "What does diversity of talent on stage offer to a comedy show?"

"I think a diverse showcase invites audience members to consider perspectives they may have never heard or experienced before. Better yet, I think it helps them connect with people they may have thought they had little in common with and find out they have commonalities after all! We all have something in common. It doesn't have to be something big, like romantic orientation, to make an impact or a create a connection. It can be something seemingly small, such as watching "Hee-Haw" as a child, or liking peanut butter and jelly sandwiches, or having conflicting feelings about your hometown. I love finding those commonalities and connections with others and making them laugh at the same time!"

Krista Atkinson warns of people not leaving it to the pros:

"I always say that, for me, comedy is about being able to have an audience relate to the comics. If I am in the audience, and a comic is telling stories that I can relate to, it establishes a connection that I appreciate having. So if you have a diverse showcase, then you have something for everyone in the audience to relate to. Then on the flip side, you have a variety of voices that can offer something new to the audience, as well. So not only will I have people that I can connect to by relating to them, but then I have people I can learn from and that can make me think in a different way because I am different than them. A show without diversity, can get very monotonous and boring, even if you do like all of the comics. The show runs much more smoothly and cohesively if you offer a variety of perspectives to your audience. You can only hear so many Tinder jokes before you start going crazy. Leave the Tinder jokes to me, I am a pro... ."

"Living your life openly is one of the highest forms of activism and doing it in a humourous way is the best way to bridge that divide. Diversity within a comedy show is the ultimate "Wam Bam"! I love what I do because I get to share who I am with people who may never come in contact with Transgender people. If they do it's probably a showgirl and I'm about the furthest thing from that. I rarely don heels, I detest glitter and can lip sync for crap, so essentially I only have a GED in all things "Showgirlery"! I would love every comedy show I do and/or see to be as diverse as possible because with every show I learn a little more about myself, people from other background and ways to wear denim I've never dreamed about...and most importantly it makes me a better ally and advocate for my own and other communities."

Rachel McCartney notices the advantages of diversity in comedy trends:

"Diversity of talent offers diversity of perspectives. Standup is about having a point of view. And while not all aspects of a comic's point of view are shaped by their demographic categories, enough are that variety in those categories matters. You can have a showcase composed entirely of straight white cis dude comics, and it can be a brilliant showcase, with each comic having something different and valuable to offer. But at the same time, there are certain things worth hearing that straight white cis dudes are just not going to think to say, because nothing in their experience would lead them to come up with it. So without women, people of color, queer people, etc. doing comedy, certain bits would just be left in the ether. And I think the absence of those bits would be felt even more acutely now than in previous decades, since comedy has been trending toward the personal and vulnerable."

Creator Adam Guerino thinks diversity actually doesn't help in a void but if done correctly, can take a show to a new level:

"Diversity in a comedy show is awesome because what better way to learn about someone than with laughter? And who better to learn about than someone different than you? Additionally, I believe when talent on stage is different, even with different kinds of different, people feel less left out. I see some shows organically do it well with a lineup that makes everyone feel welcome where they aren't all the same ethnic background, sexuality or age. And I've see some shows that seem almost forced like they're trying to fill some quota. Like they're building an ark or something. If you can't find top quality talent that is diverse, you're not trying hard enough and it makes it seem to audience members like the diversity is on display, like some sort of zoo. I can personally attest to this when I've played rooms for 100% straight white folks, the host may as well have introduced me as, "The gay." As an audience member, I'm not interested in comedy that panders, where I have the same experiences as the person on stage and they're relating things that are so relate-able that instead of laughing, I'm nodding in agreement. I want someone to take me somewhere, let me into their world with a series of belly laughs and guffaws. So as a performer, I try to think what is a unique story to me. And as a producer, I try to make sure that every show has high quality and diverse talent."

Catch the Rainbow Connection Comedy Tour in any of the following cities: