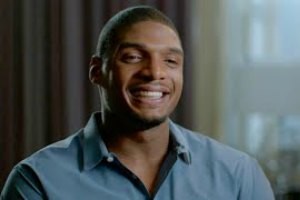 Michael Sam, the first openly gay player to be drafted by the NFL, is among the celebrities starring in Coca-Cola's #MakeItHappy Super Bowl Campaign.

While its 60-second spot won't air until Sunday, Coke this week teased what we can expect with several videos released online.

"I see negativity daily," Sam says in his 2-minute video. "I've gotten nasty tweets, Instagram messages. People have sent me YouTube videos and say how they hate me, how they wish that, you know, I was dead."

"One nasty email, she pretty much told me that we don't belong, we're evil. She's really the only hate message I've ever replied to. And what I said was, I am sorry that you feel that way. Even though you hate me so much, I still love you, and I wish you have a great day. She never replied back."