Sam Smith covers 'Rolling Stone;' says he was bullied after coming out gay 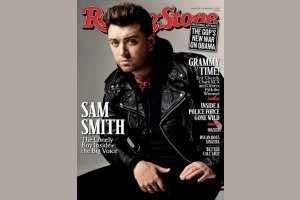 In a Rolling Stone cover story, out singer Sam Smith discusses his first heartbreak and being bullied after coming out gay.

Smith, whose debut album In The Lonely Hour has received six Grammy nominations, revealed that he's preparing for the biggest night of his career with a cayenne-pepper juice diet.

"I just want to lose weight for the Grammys, if I'm honest," he said.

"I prefer food to music and sex ...and my family," he joked in a video posted on the magazine's website.

Smith shared having his heart broken as a young teen when he wrote a "really intense" love letter to a boy two years older than he was. The student responded with a thoughtful letter, saying that he was straight and only thought of Smith as a friend.

"It makes me emotional, actually," he said. "He looked out for me for the rest of school. He just made sure that if anyone took the piss out of me, he would stick up for me. He could have made it hell for me, you know?"

Smith also described incidents of bullying, including one in which someone yelled "faggot" from a passing car as he walked down the street with his father.

"I was just embarrassed that my dad had to see that, because I could only imagine how you feel as a parent. You just want to kill them. I was always embarrassed for the people around me. It actually never deeply affected me, you know?"