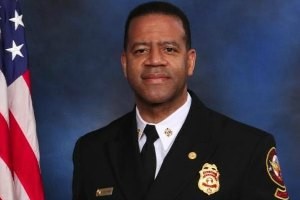 The termination comes after Reed suspended Cochran for 30 days without pay.

"This is about judgment," Reed told reporters. "This is not about religious freedom. This is about free speech. Judgment is the basis of the problem."

Reed said that the chief did not properly consult city officials before publishing his book, a claim that Cochran denies. The mayor also said that Cochran had opened Atlanta to possible discrimination lawsuits.

In a statement released through the Alliance Defending Freedom, Cochran insisted that he had been terminated because of his religion.

"I am heartbroken that I will no longer be able to serve the city and the people I love as fire chief, for no reason other than my Christian faith," he said. "It's ironic that the city points to tolerance and inclusion as part of its reasoning. What could be more intolerant and exclusionary than ending a public servant's 30 years of distinguished service for this religious beliefs?"

The book, titled Who Told You That You Were Naked, is being sold at Amazon.com and BarnesAndNoble.com. In one passage, Cochran describes being gay as a "perversion.": "Uncleanness – whatever is opposite of purity; including sodomy, homosexuality, lesbianism, pederasty, bestiality, all other forms of sexual perversion."

"Naked men refuse to give in, so they pursue sexual fulfillment through multiple partners, with the opposite sex, the same sex and sex outside of marriage and many other vile, vulgar and inappropriate ways which defile their body-temple and dishonor God," he writes elsewhere in the book.