Lakeside Pride celebrates 'Women in Music' this Sunday in Uptown 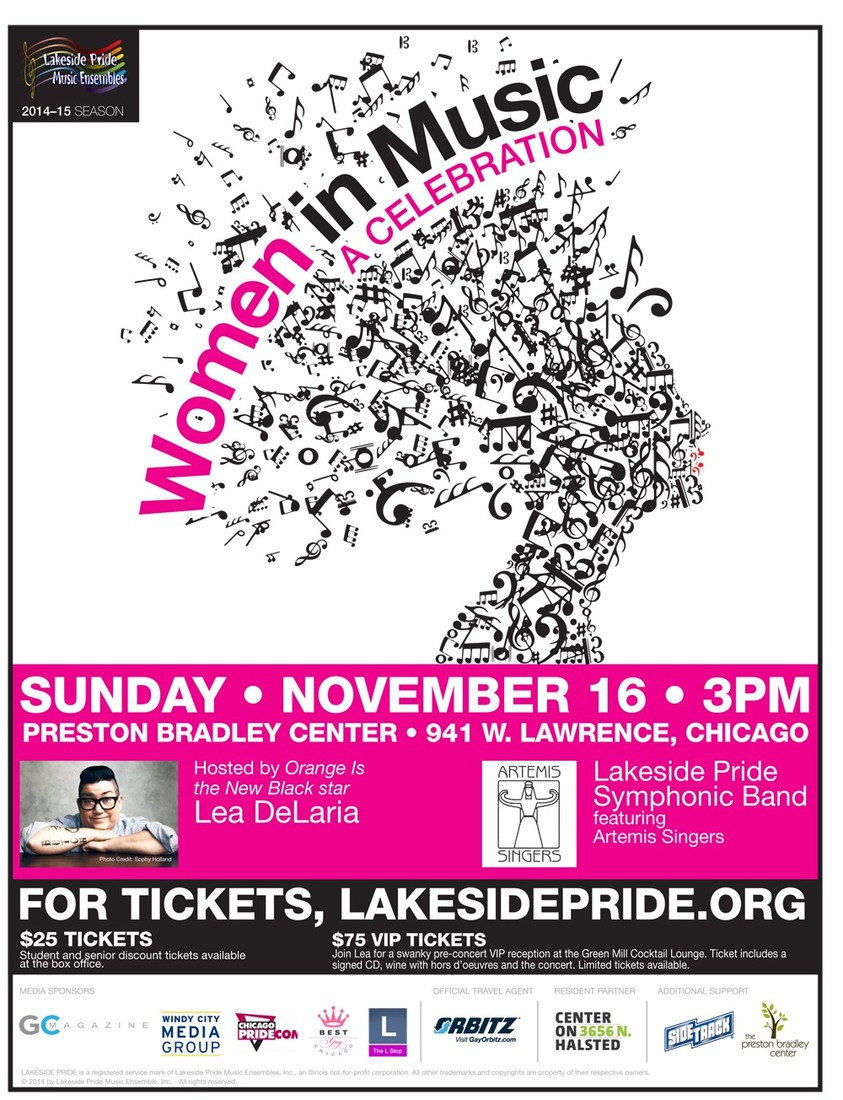 Chicago, IL - This Sunday, Nov. 16, join Lakeside Pride -- a group of four LGBT-driven bands in Chicago -- for a very special one-night-only festive concert: "Women In Music." Featuring female composers, conductors and performers, the show celebrates the many, but often overlooked, contributions of women to music. Lakeside Pride will be joined by Chicago's lesbian feminist chorus Artemis Singers and the whole event will be emceed by comedian Lea DeLaria, who you probably know for her stand-up comedy and role as Big Boo on "Orange Is The New Black."

"Lakeside Pride Music Ensembles is Chicago's family of LGBT bands," Lakeside Pride Music Ensembles adviser Andrew Favreau explained to ChicagoPride.com. "We were born out of the desire to have a marching band in the Annual Chicago Pride Parade, and reflect the legacy of gay bands in Chicago that started in 1979 with the Chicago Gay Pride Band...Our ensembles are open to anyone who is interested in playing, regardless of ability. In 2011, we were named to the Chicago Gay and Lesbian Hall of Fame for our contributions to our community."

Together, the four ensembles who make up Lakeside Pride -- Freedom Marching Band, shhh... OUT! Jazz Ensemble, Symphonic Band and Symphony Orchestra -- reach more than a million people annually. The bands have been frequent advocates for LGBT equality in Illinois, with their Lakeside Pride Freedom Marching Band attending the March on Springfield for Marriage Equality at the organizers' request. This was followed-up with their special "Stand Up! A Musical Celebration of Equality" concert in Lakeview, featuring the Lakeside Pride Symphonic Band (a live recording of this concert is available on iTunes.)

Lakeside Pride also secured Cliff Colnot, the principal conductor of the Civic Orchestra of Chicago, to orchestrate the original score for "Scrooge & Marley," the recent queer take on a Christmas Carol filmed and produced here in Chicago and covered on ChicagoPride.com. Members of Lakeside Pride also performed as part of the Scrooge & Marley Orchestra to record the original motion picture soundtrack.

"Lakeside Pride concert programming is inspired by what we think will move both our audience and ensemble members, as well as issues within both our musical and LGBT communities," Favreau responded when asking about the content for Sunday's concert. "The idea to celebrate and bring visibility to female composers came out of the research our Lakeside Pride Symphonic Band Conductor Kyle Rhoades did when preparing for our 2014/15 Season. Women composers have historically not had the same opportunities to have their music performed."

"Staging a concert that features compositions written or arranged by women will hopefully inspire other arts organizations to help expand the repertoire and encourage more performances," he concluded.

The program will consist entirely of pieces written and arranged by some of music's most impressive and talented women. 2010 Pulitzer Prize-winner Jennifer Higdon will be honored by a performance of her masterwork "Rhythm Stand" and "Women of the Podium March" will celebrate Lieutenant Colonel Virginia Allen, USA, Ret., the first woman to command and conduct an active duty military band and the first woman conductor at West Point. Favreau also teases a performance of "One Life Beautiful" by Julie Giroux, the first woman, and the youngest person ever, to win an Emmy for Outstanding Individual Achievement in Music.

Special guests Artemis Singers will join Lakewide Pride to lend their voices to the band's music for two choral works as well as an unbelievable finale featuring "Light From the Fire Within," the uplifting song featured at the 2002 Olympic Games in Salt Lake City. Founded in 1980 and inducted into the Chicago Gay and Lesbian Hall of Fame back in 2008, Artemis Singers have a long history of performance both locally and nationally, recently participating in the Sister Singers Network National Women's Choral Festival, alongside 19 other ensembles. According to Midge Stocker, Sunday's show with Lakeside Pride will feature the world premiere of "The Artemis Inclination," written by members Alison Downing and Mary Rapp.

"It's a real toe-tapper and includes a bit of feminist rap!" she teased. "Over the years [Artemis Singers and Lakeside Pride have] had crossover of several singers from the band to the chorus and from the chorus to the band, so it's always fun to combine our sounds."

"Artemis Singers has been a fixture of the Chicago music scene for 35 years," Favreau added. "As the first lesbian feminist chorus in the United States, we knew early in the planning stages the event would not be complete without them and were thrilled when they agreed to appear with us on this concert."

Both groups are beyond excited to be sharing the stage with the talented and hilarious Lea DeLaria, "The Butch Queen of Hollywood," who will be playing host for the afternoon. The first openly gay comedian to perform on national TV some two decades ago, DeLaria is now known not only for her comedy, but her acting roles as well -- especially since her casting as Carrie "Big Boo" Black on "Orange Is the New Black." DeLaria also has a background in music, being the daughter of a jazz musician and having performed as a jazz singer and even recorded albums.

"Very cool does not begin to describe how excited all of us are to have Lea DeLaria host our concert," Favreau said. "Lea has been an out and proud stand-up comic, actor, and jazz musician that has confronted lesbian stereotypes and educated audiences about the LGBT experience for more than 30 years. She accomplishes with comedy what we do through music. From the very beginning, Lea has been extremely supportive of this entire event and we couldn't be happier."

Tickets are available for a very small VIP meet-n-greet event before the concert at the Green Mill Cocktail Lounge (Al Capone's favorite hideout, a tribute -- Favreau says -- to DeLaria's role on "Orange Is the New Black"). The $75 ticket includes a wine reception with Lea DeLaria, a signed copy of her "Play It Cool" CD, and a ticket to the concert.

The concert itself is being held at the Preston Bradley Center, 941 W Lawrence Avenue, conveniently located near the CTA Red Line as well as several bus routes. Street parking is available nearby, while validated parking is also available at Weiss Memorial Hospital's main parking facility at 4650 N. Clarendon, just a half mile away. Parking is $5 with validation purchased from the box office on the day of the show.

Tickets for the concert are $25 and can be purchased online at lakesidepride.org or at the Preston Bradley Center Box Office starting one hour before the concert. Discounted senior and student tickets can be purchased, subject to availability, online in advance or at the box office on the day of the concert. For group rates, please call (773) 381-6693.