Manhole: The return of and history behind a Boystown legend 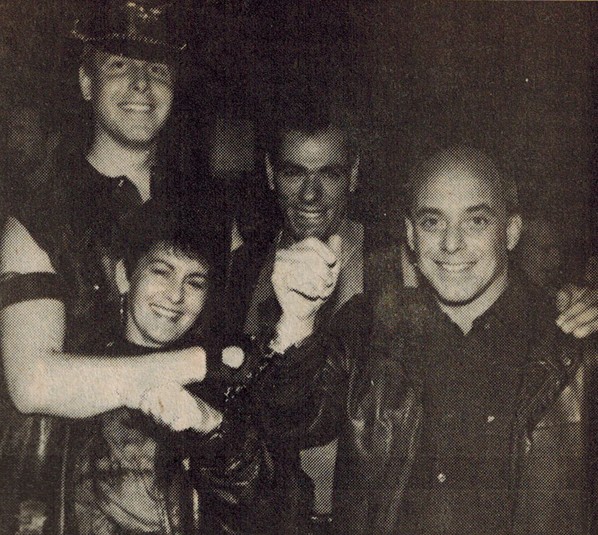 Chicago, IL - It's no secret that Boystown has been going through major changes over the last couple years, with bars and restaurants closing down and springing up in storefronts throughout the gayborhood. While oftentimes these changes mean bidding adieu to long-established haunts, this weekend Halsted Street saw the return of an old favorite.

Manhole, the famous -- or infamous -- late night club known for their steamy, dress code enforced back dancefloor and pulsating music is back, thanks to LKH Management, who seeks to bring something new to Boystown by bringing back something old. They envision the new Manhole, located in the Chloe's space carved from the upstairs and basement bars of the old Spin Nightclub, as both a gathering place for the fetish and leather communities and a space where all of gay Chicago can experience the kind of deep house, industrial and trace music that made Manhole famous as well as the sense of community and the atmosphere that made it infamous.

This was before the Internet and iTunes, when the proposals we now make on Grindr and Scruff were made walking down Halsted, at the bar and on the dance floor...

"[It was] definitely a very different time in Boystown," Matthew Harvat, aka Circuit MOM, told ChicagoPride.com. "You went out to the gay bars because that's where you met people -- no Facebook, no Instagram, no 'social' apps. You cruised in person! You went to hear the DJs because that was the only way you heard new music."

"The great thing about Manhole was that, even though there was an enforced dress code of leather or shirtless, rubber, uniforms and/or a harness to be allowed into the back rooms and dance floor, it was never something that made anyone feel out of place," he continued. "Yes, it was a bar that had very specific rules and catered to a certain crowd, but when you looked around, there was a little bit of everything and everyone there -- all together in that late night chaos of smoke, lights, music and more."

Like many greats of the past, especially those from before the Age of the Internet, the details about the beginning and ending of Manhole's story can be quite fuzzy, even for Boystown veterans like Harvat, who arrived in Boystown in the late '80s just prior to Manhole's inception. (Luckily here at ChicagoPride.com we have LGBT historian Sukie de la Croix and his incomparable personal archives of Chicago's gay history). At that time the space on the southwest corner of Cornelia and Halsted was occupied by Christopher Street, a video bar and dance club that lovers Steven Brahill and Patrick Kasaris opened along with Kasaris' sister Susan and her husband Jeff Tessler back in 1982.

According to his obituary, Brahill died of complications related to AIDS in September of 1988. It was soon thereafter that Brahill's lover and his sister and brother-in-law converted Christopher Street into Manhole, which opened in October of 1990. Pictures from the club's opening night list Kasaris and the Tessler couple as owners alongside the bar's manager, Ben Pohl.

The original Manhole was dark, with a blacked out exterior and a "down and dirty atmosphere with a gritty feel and interior," according to Harvat and just about anyone else willing to reminisce about the old club. While it went through several incarnations during its run, the layout was similar to today's Hydrate Nightclub, but less open. The front bar area and hallway to the back remained the same, but the back space was divided by a brick wall into a middle bar and then the back dance floor -- "that tucked away, dark and dirty dance floor," Harvat reminisces.

The last remodel Manhole did saw them take the atmosphere even further. The front bar was made to look like one of the underground tunnels you see below the city on TV specials and in the back it appeared as though they'd used dynamite to blast a hole in the 2' thick brick wall and left the rest standing, creating the feeling that clubgoers were dancing in a subterranean construction zone.

"Manhole had the advantage on Halsted because it was a 4 a.m. bar, so when Roscoe's and Sidetrack closed, if you didn't go to The Closet or to eat at Melrose, you went to Manhole," Harvat explained. "Because there was an enforced 'undress' code, people were more forward with their cruise. Sort of like 'SCRUFF-LIVE'!"

Admittance to Manhole's back dance floor was only granted for the shirtless or those dressed in leather, gear or other festishwear. It became notorious for a steamy, sexy atmosphere and an "anything goes" mentality when it came to dark corners. Without dating or hook-up apps, gay men during Manhole's heydey did all their flirting and cruising at the bars, tete-a-tete. At a bar like the Manhole, where inhibitions were usually checked along with patron's shirts and pants, picking-up led logically to the physical.

"In order to protect the innocent, I will only say that there was this foam party there once and I was very thankful to at least make it out with a shirt, my shoes and a smile that lasted about 4 days," Harvat said. "OOOHHH, wait -- there was the time that some out of town, boozy queen thought they'd be funny and try to snatch the wig off the legendary performer Teri Michaels' head. Well, let me tell you, if you want to see a 5'3", 100 lb. diva turn into Dragzilla and completely destroy a guy with nails, heels, flying rhinestones and a mean left hook... good times!"

In addition to its infamous reputation and status as Halsted Street's first leather bar, and thus a gathering place for those in the leather and kink communities, Manhole was revered for its DJs, performances and cutting-edge blend of music. While Sidetrack and Roscoes, which opened in '82 and '87 respectively and were even then staples in Boystown, played mostly pop, Manhole explored house music "with infusions of circuit party style anthems." According to Harvat "it had an edge and a beat like no other Boystown bars or dance floors" and he describes the DJs as "educational," especially for a budding performer like himself.

"Manhole was the where I heard Deborah Cox for the first time and probably knocked 10 people over getting to the DJ booth to find out what this song was and who was this voice!?" he remembered. It was the Hex Hector mix of 'Things Just Ain't The Same' in '96 and that one track, that one song, changed my whole dance floor experience forever. I will forever associate that song and that moment with Manhole."

"I used to go there and the original Crobar specifically to experience and learn about the music that would shape my own DJ style and events today," he continued. "Those two places held and hosted a crowd of everyone -- muscle boys, drag queens, twinks, bears (before bears were so trendy), conservative gays, industry professionals, leather guys... all of it. We were all a spectacle for each other as a group and that was what made it all so much fun."

Wildly popular throughout the 90s, Manhole's story began to wane around the time of the Millenium. Details are fuzzy here again, but Mark Liberson of LKH believes that after Steve Kasaris died, Tessler and the remaining management who took over stopped investing in the bar, which became less and less popular and successful. Finally they decided to sell the business and Manhole closed in 2002, shortly thereafter being bought by Liberson who turned the space into the still-popular Hydrate Nightclub.

Since then LKH Management has expanded to own several businesses along North Halsted, including Halsted's Bar and Grill, cocktail bar Elixr and recently Replay: Beer and Bourbon, but it all started with Liberson's acquisition of the old Manhole space.

"Since that we have not only invested in continuing to improve Hydrate, but tried to identify what might further benefit Halsted and ensure that it will continue to be one of the major gay destinations in our country," he said.

Liberson told ChicagPride.com that they threw Manhole events at Hydrate from the start, but the public wasn't ready for it yet -- with the wounds of the old club's closing perhaps too fresh. He continued, however, to protect the brand, saying he knew it would have a future eventually. That future was Andrew Kain "AK" Miller.

With Miller's help, Hydrate began throwing Manhole events several times a year. The nights usually featured a kink or fetish theme and the club resurrected Manhole's old dress code, denying dance floor access to anyone not shirtless or in gear. The nights proved wildly popular, bringing Hydrate bodies and attention, including that of the leather and fetish communities, who have few outlets along Halsted outside of Cell Block.

"I first approached Hydrate about producing Manhole events for very selfish reasons," Miller told ChicagoPride.com. "I wanted a place for men my age to gather and hear music and be surrounded by an energy that was different from what other venues were offering. Manhole was one of my favorite clubs when I first moved to Chicago and I missed it. Mark, Sean and the staff of Hydrate welcomed the concept and it quickly became a regularly recurring event."