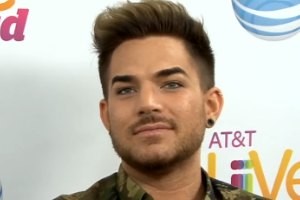 Out singer Adam Lambert believes it's getting easier for openly gay male artists.

Lambert was the first gay male artist to have a #1 album. Since then, Frank Ocean and Sam Smith have come close.

When asked by gay male entertainment blog TheBacklot.com whether it was getting easier for gay male artists, Lambert responded, "I do!"

"I don't think a piece of music is actually that specific, at least most of the big pop songs that I've heard. They're non-specific, everyone can relate to them, which is the whole point, that's why they're popular. If I'm listening to an Adele song, which is written by a woman for a man, I can relate to it also, and so can a straight woman, and a straight men, so why can't a gay artist have that same kind of universal appeal?"

Lambert added that he was "getting a little chunk of summer" before the start of the next leg of the Queen tour.