Boystown welcomes the world with lively happenings at Market Days 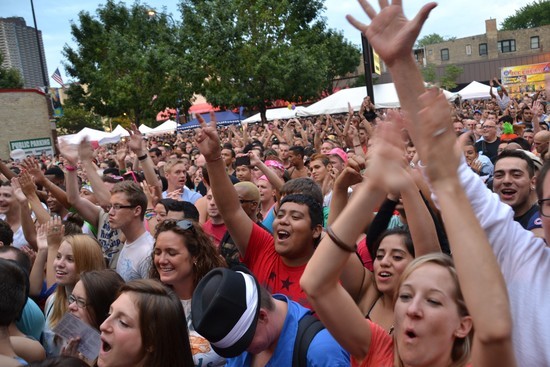 Fun, festivities and plenty of parties greet thousands of visitors during the 2014 Northalsted Market Days, Saturday, Aug. 9 and Sunday, Aug. 10.

Chicago, IL - This weekend upwards of 200,000 will descend on Boystown for the Midwest's largest street festival -- because who knows how to throw a party better than the LGBT community?

The 33rd annual Northalsted Market Days is once again taking over the six blocks along Halsted between Addison and Belmont. Get ready for three stages and two days of music, food and general revelry along with scores of out of town visitors and some of the year's most fabulous and out-of-this-world parties.

The festival itself runs Saturday and Sunday, August 9 and 10, from 11 a.m. to 10 p.m., when Boystown's Main Drag will be closed to traffic and lined with booths offering everything from food to booze and all the rest of your favorite summer festival vendors. Your favorite bars will be out and about with their own fabulous, over-the-top booths featuring sexy dancers and blasting beats to help encourage lots of dancing in the streets.

You best be ready to dance, because this year's festival stage headliners are all about fun music you can't help but shake it to.

On Saturday at 8:45 p.m. check out Belinda Carlisle at the North Stage. Carlisle is best known as the lead vocalist of the Go-Gos -- the high energy 80s girl group known for their hits like "Our Lips Are Sealed," "We Got the Beat," "Vacation" and many more. She also went on to a successful solo career that included the wildly popular and still often played "Heaven Is A Place On Earth" (think Romy and Michele's High School Reunion).

Neon Trees is hitting the North Stage on Sunday at 5 p.m. with their unique brand of fun, alternative new wave music. Their first single "Animal" was No. 1 on the Alternative Rock chart and No. 13 on the Billboard Top 100 and their hit song "Everybody Talks" was ubiquitous on the radio and at the clubs as well. Lead singer Tyler Glenn, who was raised Mormon and made waves in March of this year when he publically came out in a Rolling Stone article.

"We are very much like a rock band when we play live," Glenn told ChicagoPride.com. "But I think that as much as we are a band playing our music, we put as much theatricality that we can in the show... I never stand still. I love to entertain. Even if you're not familiar with all of our music, I think it's an entertaining show."

Also headlining is the pop duo Karmin, made up of Amy Heidemann and Nicholas Noonan, who hit the North Stage Sunday at 8 p.m. You'll definitely remember jamming out and belting along to their 2012 hit "Brokenhearted," featuring Heidemann's dynamite vocals as well as the more recently released "Acapella" and "I Want It All."

A plethora of musicians, both local and national, also make their marks at Market Days this year. Saturday features R&B singer Deborah Cox (best known for her 1998 single "Nobody's Supposed to Be Here"), Crush on the Radio, out singer/songwriter Steve Grand, who gained fame when his music video "All American Boy" went viral last year and indie rock band Girl In A Coma, along with many more, including a performance by the Chicago Spirit Brigade. Sunday's lineup includes Mary Lambert, best known for her collaboration with Macklemore on "Same Love," on the Roscoe Stage just after noon, as well as pop singer Aaron Carter, younger brother of Backstreet Boy Nick Carter, Lez Zeppelin and the festival-favorite 16 Candles.

The mass migration of gays and lesbians from across the country for Market Days also means the weekend will play host to some absolutely amazing parties.

"The best part about Market Days for us is all of the Chicago guys and girls bringing their out of town friends to our event," Matthew Harvat, a.k.a. CircuitMOM, who is throwing his "Volcanic Revolution" party at the House of Blues, told ChicagoPride.com. "We try to do Chicago proud and show visitors that we can throw some amazing parties here. Add the spectacular Neverland guys doing their Friday night event 'Gravity' at Metro and the massive Alegria party on Sunday at Castle, and this Chicago weekend rivals any other cities lineup of dance parties. White Party, Winter Party, Black Party, Gay Disney... and, now, Market Days."

The weekend kicks off Friday, August 8, with the latest high-concept theme party from Neverland. "Gravity" is a deep-space adventure that takes partygoers to another world with a slew of fabulous costumes and walking art. Returning to Metro Chicago, 3730 N Clark, after their very successful Pride party, the Neverland team is excited to dazzle and surprise with a bigger-and-better stage show that will also be utilized for their monthly Drag Carnage event. So come for a night of fabulous drag featuring queens from across the country, followed by an out-of-this-world dance party featuring DJ Cindel and house music legend BORIS. Tickets are available at www.metrochicago.com.

On Saturday, August 9, CircuitMOM Productions returns to Market Days with "Volcanic Revolution," the latest in their series of killer dance parties at the House of Blues, 329 N Dearborn. After holding a contest allowing fans on Facebook to select the party's theme, organizer Matthew Harvat promises a partygoers will be transported to a lush, Polynesian mountaintop with a huge set extending onto the dance floor -- a set that includes an active volcano.

Add to the roster some sexy gogo boys and beats spun by DJ Joe Gauthreaux, who wowed at "Love Revolution" at the Chicago History Museum over pride, and Toronto's DJ Joe Picard and you have a night that's not to be missed. The last two Revolution parties over Market Days weekend have sold out -- so get your tickets ASAP.

Closing out the weekend will be Ric Sena's Alegria Chicago party at Castle, 632 N Dearborn. This is the third year that this mainstay of New York nightlife has traveled to Chicago for Market Days weekend, and with music by DJ ABEL it's the perfect way to round out the celebration. Tickets are available online at www.alegriaevents.com.

"Since all of these events start after the street fair closes down for the night, they compliment Market Days instead of taking away from it," Harvat said. "Everyone wins."

Boystown -- the epicenter of Market Days -- will see its share of fantastic parties and club nights as well! These are just a small sampling of all the fun and frolicing going on this weekend! Check the ChicagoPride.com calendar for a complete list of all the events and get ready to party!