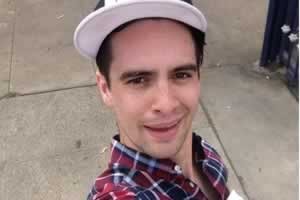 Brendon Boyd Urie, the 27-year-old lead vocalist of Panic! at the Disco, has described a Westboro Baptist Church (WBC) protest during a Kansas City performance as "pathetic."

After the church, which is known for its opposition to gay rights, announced it was protesting the band, members decided to donate $20 to the Human Rights Campaign (HRC), the nation's largest LGBT rights advocate, for each protester that came to its show.

"And I thought we were gonna make a huge donation!" Urie told Michigan weekly Pride Source. "But 13 people showed up for 20 minutes, and then they left. That was weak. It was pathetic. So, we're gonna throw in a little more [money], because that was stupid." (The band has pledged $1,000.)

Urie, who last year said he had "experimented" with men in his past, also gave some examples of the men he finds "straight up attractive," including Ryan Gosling, Charlie Hunnam and Paul Newman.