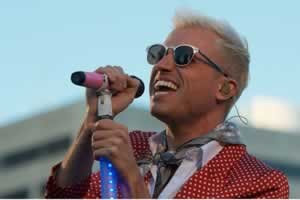 Tyler Glenn, the recently out frontman for the Utah-based alternative rock band Neon Trees, discussed reconciling his Mormon faith and coming out with The Rainbow Times.

The 30-year-old Glenn came out in April, tweeting to his followers: "Yes. I am a happy and healthy Mormon gay pop star. I don't know what it all means, but I'm ok with it."

Glenn said that while he's not an active churchgoer he loves being a Mormon.

"I go [to church] occasionally, but I haven't actively gone to church in about seven or eight years," Glenn said. "I've always kind of felt like I didn't fit in, but at the same time, I love serving in the mission, I love the teachings, I love The Book of Mormon. There are a lot of things I really, really believe in."

"It's funny. Coming out as gay – it was almost harder to come out as Mormon."

"I was surprised how many people didn't know I was Mormon, that I was raised that way. I got a lot of flak from atheists, which is interesting. A lot of gay atheists were applauding that I was coming out, but bashing me because I decided to still remain Mormon," Glenn added.

Glenn said that he is single but hoping to marry someday, adding that he's into bears: "I currently have GROWLr [app] because I like masculine, hairy guys – I guess we call them bears – so I have the app for that. But I'm not active on it."