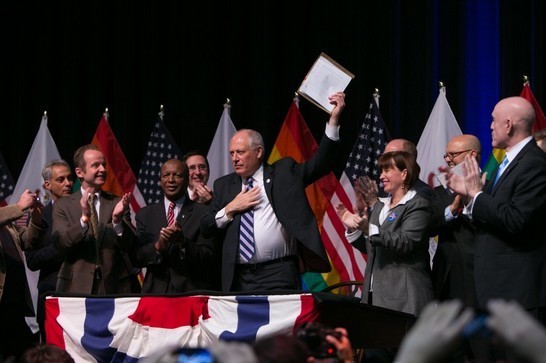 Bernard Cherkasov: ‘This is an undeniably historic day’

Chicago, IL - For the first time in Illinois, same-sex couples across the state will be able to marry.

"This is an undeniably historic day," Equality Illinois CEO Bernard Cherkasov told ChicagoPride.com. "Today the freedom to marry finally takes effect across Illinois. This day couldn't have come soon enough for many of the tens of thousands of couples we met across the state whose love and commitment deserves to be recognized as equal."

Equality Illinois was one of the founding members of Illinois Unites for Marriage, a statewide coalition that worked to win the freedom to marry in Illinois.

"Illinoisans from all walks of life worked tirelessly to bring about this moment, and each one of them deserves credit," said Cherkasov. "As we celebrate every couple who can now get married, we also salute all those who worked to make marriage equality a reality in Illinois."

On Nov. 20, Illinois Governor Pat Quinn made Illinois the 16th state in the union to allow same-sex marriage when he signed SB10, the Religious Freedom and Marriage Equality Act, during a ceremony at at the UIC Forum in Chicago.

When Illinois' marriage equality law was passed, lawmakers set June 1, 2014 as the date it would take effect. On Feb 21, Judge Sharon Coleman ruled the state's ban on gay marriage was unconstitutional. Illinois LGBT couples would not have to wait until June to marry.

Most county clerk's offices, including Cook County's, will be closed Sunday, so many couples likely cannot actually marry before June 3, given the state's 24-hour waiting period after obtaining a license. Equality Illinois reported that Champaign, Christian, Crawford and Montgomery County clerks will however be open on Sunday. All other counties in the state must be ready to issue licenses on June 2. Furthermore, all 102 counties in the state must be able to issue certificates to upgrade civil unions as well.

A number of events are planned throughout Chicago to commemorate the effective date, among them are "Married in Unity", a group-marriage event at Unity in Chicago, 925 W. Thome Ave., a blessing ceremony at Kathy Osterman Beach and a "Big Queer Latina/o Wedding" sponsored by United Latino Pride Organization and Lambda Legal, all on June 1, and a number of complimentary wedding ceremonies to be performed at Museum of Contemporary Art on June 2.

Timeline: Illinois gets marriage equality: A look back at 2013

Related: Dozens of Illinois couples to tie the knot on first day of marriage equality