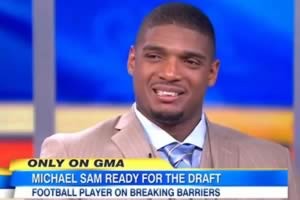 Sam, 24, who came out gay in February, could make history this weekend as the first openly gay NFL player.

"Was Deion Sanders on point with his statement that all locker rooms – high school and the professional leagues – are already occupied by players in The Closet who are afraid to come out and why is that?" a viewer asked through Facebook.

"You know on the night of my announcement that week I'd gotten so many emails, so many text messages from my college and NFL players and other athletes in the sport industry about how courageous I was. Them themselves are closeted homosexuals. So, yeah, I'm not the only one. There's a lot of us," Sam answered.

"I heard from a good portion of them," he added.

When Roberts asked "What do you want people to know on the eve of the NFL draft?" Sam answered: "I'm here to stay. Michael Sam is here to stay. I'm not going anywhere.I want to thank everyone for their support. I hope I do live up to their standards."

Also on Wednesday, Sam was announced as the winner of this year's Arthur Ashe Courage Award. He will receive the award at The 2014 ESPYs on July 16.