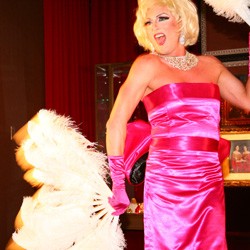 "I don't know that I necessarily stand out from [other performers]," Harvat says of Circuit Mom's seemingly set establishment as the circuit's signature entertainer, "but I am very fortunate to be able to surround myself with the most amazing people—starting with my partner of 15-years, Roger-aka-Circuit Dad, and the hundreds of people that helped shape me into the performer I am today."

"Circuit Mom is an exciting entertainer who magically engages her audience, and does it with a sense of bringing our community together," says Cherry Fund Chair Paul Marengo. "The experience of showcasing her talents for the past 10 years at various special events, including past CHERRIES, with such quality is what brings her to Washington, D.C. for Cherry Weekend."

As is Cherry's annual charitable tradition, the weekend's proceeds will benefit a varied grouping of local and national LGBT service organizations that were specifically selected for their pro-community contributions. Since its inception in 1999, The Cherry Fund's Web site broadcasts the organization's raising $877,000 for over 35 beneficiaries that range from recreational sports leagues and annual Pride and Pride-connected celebrations to youth advocacy coalitions and HIV/AIDS care-related causes.

"Cherry Weekend is a prime example of how volunteerism can get things done in a diverse community because they strive to touch all community groups," Harvat explains. "[The Cherry Fund has] gay and straight-friendly events of every scope and size. By trying to include the many facets that make up our community, Cherry helps in raising awareness on many levels while hopefully building strong ties between people. I'm ecstatic to return to DC and hope to help make this year the best one yet."

Eager to experience the "visual extravaganza" designed by 360 Presents' Dennis Brown, "I may even do a drive by appearance on Friday night," Havat says with a wink. He anticipates the event as "hot, sexy fun," and jokingly advises, "You better come get you some."

Following the festivities, Harvat plans on returning to his Chicago homestead to continue overseeing the re-launch of Circuit Mom's Web site, circuitmom.com. The site's new version, Harvat shares, will feature DJs, interviews, CDs, events and blogs. Circuit MOM Productions, Inc. has also recently expanded its talent roster to include up-and-coming DJs in addition to the company's current list of established DJs. Harvat's available to spin too, and mentions one gig that he's fervently hoping to get.

Harvat states, "My goal is to DJ on the beach in Rio de Janeiro during Carnival before I die."

Complete venue and event information for Cherry Weekend is listed online at www.cherryweekend.org.

Related: Click Here to Win FREE Airfare for two from ChicagoPride.com and the all-new CircuitMom.com.