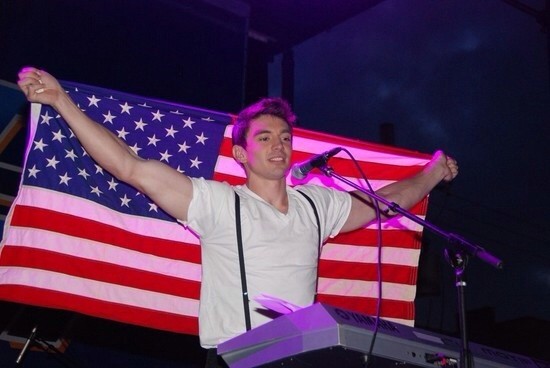 Chicago, IL - Chicago-area native and gay country singer Steve Grand returns with a Kickstarter campaign to fund his first album, which is expected in May, and to offer fans a special sneak peek at his latest efforts.

"My fans are the reason I've gotten this far. I love them all," the 23-year-old Grand told ChicagoPride.com on Wednesday. "Now I need all my fans to be my record label and back my Kickstarter campaign to make this album a reality."

This time last year, Grand was a little known singer-songwriter, but that changed on July 2 when his self-funded music video, "All-American Boy," a song about unrequited love between two men, posted to YouTube. The video quickly went viral, accumulating more than 2.75 million views, landing Grand in the national spotlight.

Hailed as a "viral sensation" and one of America's "first openly gay country stars," Grand then released a second single, "Stay," then a third, "Back to California," which offers a sneak peek at his first full-length album due out this spring.

"I've been pulling all-nighters recording and writing, and the album is shaping up to be something I'm really proud of," Grand explained. "It's all about the wild ride of being human – love and loss, hope and regret, the struggles of growing up. And there are also songs that are just plain fun, that make you want to get up and dance and party."

With his new Kickstarter campaign, Grand is asking fans to help make his dream of making a record a reality. He needs to raise $81,000 by March 30.

To give everyone a sneak peek, Grand has released a music video for "Back to California" on YouTube.

"I hope all my fans in Chicago will check out 'Back to California'," said Grand.

(Search "Steve Grand" on Kickstarter.com to find the campaign)

Update: Fans fully fund Grand's Kickstarter campaign in just 17 hours. As of Thursday afternoon, fans have already pledged $118K and that number continues to rise. Grand's Kickstarter has become one of only 32 out of 27,000 music projects in Kickstarter's history to successfully realize $100,000 or more in funding.

Grand spoke to ChicagoPride.com on Thursday afternoon and expressed sincere appreciation for his strong fan base.

"I have a lot of faith in my fans," Grand said. "I really knew they'd come through for me. For this to happen so fast, I'm just blown away. I'm so grateful."

ChicagoPride.com will continue to update this story, including more from our interview with Chicago's out country singer.