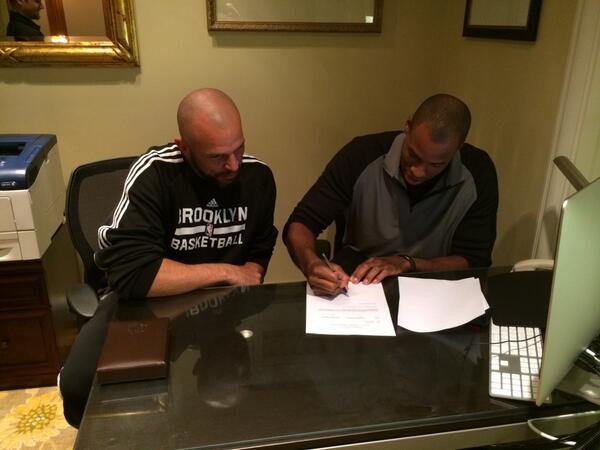 Jason Collins has signed a 10-day contract with the Brooklyn Nets, becoming the first openly gay athlete in the NBA's history.

"The decision to sign Jason was a basketball decision," Nets general manager Billy King said in a statement. " We needed to increase our depth inside, and with his experience and size, we felt he was the right choice for a 10-day contract."

The Nets tweeted out a picture of Collins signing his contract.

The 35-year-old remained unsigned since coming out gay on the cover of Sports Illustrated last year. He hasn't played in an NBA game since April 2013 with the Washington Wizards.

Collins will be in uniform Sunday night when the Nets play the Lakers in his hometown, Los Angeles.

Bill Gubrud founder of the National Gay and Lesbian Sports Hall of Fame, a group that recognizes both individuals and organizations whose achievements and efforts have enhanced sports and athletics for the LGBT community, applauded the announcement.

"This past year has been exciting for the LGBT community in regards to professional sports," said Gubrud. "Jason Collins signing his contact and finally playing in the NBA will give the youth and adults alike in our community a sense of pride they have never been seen before. Words can not express the profound emotions I am feeling."

Collins was among the inaugural class of Hall of Fame inductees on Aug. 2 at Chicago's Center on Halsted.

Very excited to watch @jasoncollins34 tonight more importantly I am proud to call him my friend.