Vladimir Putin: Gays can feel 'at ease' at Sochi but must 'leave children in peace' 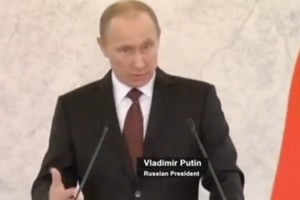 Moscow, Russia - Responding to questions over an anti-gay law approved in June, Russian President Vladimir Putin on Friday insisted gays can feel "at ease" during the Sochi Games but added that they must "leave the children in peace."

Russia's law prohibits the promotion of "gay propaganda" to minors, effectively shutting down pubic demonstrations of support for LGBT rights in Russia.

Speaking on Friday during a visit to Sochi, Putin insisted that gay people face no discrimination in Russia.

"We have no ban on nontraditional sexual relations," Putin said. "We have a ban on propaganda of homosexuality and pedophilia, I want to underline that, on propaganda among minors."

"We aren't banning anything, we aren't rounding up anyone, we have no criminal punishment for such relations unlike many other countries," he added. "One can feel relaxed and at ease, but please leave the children in peace."