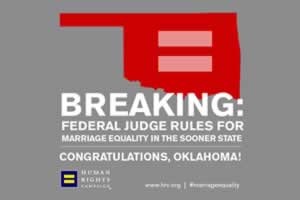 Evan Wolfson, founder and president of Freedom to Marry, the nation's largest group devoted to the issue of marriage equality, cheered the ruling.

"This is a tremendous day for loving and committed same-sex couples and their families in Oklahoma, building on the momentum of eight other states that ended their restrictions on marriage for same-sex couples in 2013," Evan Wolfson said in an e-mailed statement. "The federal district judge has done the right thing by affirming that marriage is a fundamental freedom for all people, gay and non-gay – for all of us who believe in liberty and fairness. As the case makes its way up through the courts, we will continue to do the work of having conversations about why marriage matters and creating a climate for victory when the Supreme Court eventually takes the freedom to marry case that brings national resolution. The momentum for the freedom to marry will continue as we win more hearts and minds, working to bring the freedom to marry throughout the country."

Chad Griffin, president of the Human Rights Campaign (HRC), added: "Judge Kern has come to the conclusion that so many have before him – that the fundamental equality of lesbian and gay couples is guaranteed by the United States Constitution."