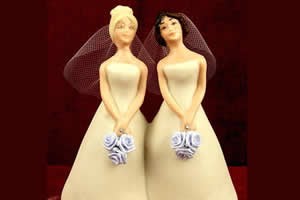 "The Court declares that Part A of the Oklahoma Constitutional Amendment violates the Equal Protection Clause of the Fourteenth Amendment of the U.S. Constitution by precluding same-sex couples from receiving an Oklahoma marriage license," U.S. District Judge Terence Kern said in his 68-page ruling, which he stayed pending an appeal.

Question 711, which defines marriage as a heterosexual union, was approved by 76 percent of voters in 2004.The amendment also prohibits the state from recognizing gay couples with civil unions.

Plaintiffs in the case are two gay couples – Mary Bishop and Sharon Baldwin and Gay Phillips and Susan Barton – who filed their lawsuit shortly after the amendment's passage.

"Judge Kern has come to the conclusion that so many have before him – that the fundamental equality of lesbian and gay couples is guaranteed by the United States Constitution," said Chad Griffin, president of the Human Rights Campaign (HRC), the nation's largest LGBT rights advocate. "With last year's historic victories at the Supreme Court guiding the way, it is clear that we are on a path to full and equal citizenship for all lesbian, gay, bisexual and transgender Americans. Equality is not just for the coasts anymore, and today's news from Oklahoma shows that time has come for fairness and dignity to reach every American in all 50 states."

The ruling comes on the heels of a similar decision in Utah. Also a federal judge in Ohio found that the state must recognize the out-of-state marriages of gay couples on death certificates. In making his ruling, the judge said Ohio's marriage ban was unconstitutional.