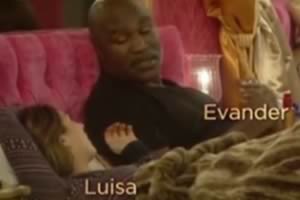 London, UK - Boxing champ Evander Holyfield has compared being gay to a physical handicap that can be fixed.

The 51-year-old Holyfield is a contestant on the reality show Celebrity Big Brother UK.

Lounging in bed with Apprentice UK star Luisa Zissman, the pair got on the topic of gay boxers. After Holyfield said that gay boxers had to remain closeted, Zissman offered: "I think it's good to be open like that. It's normal."

"What would be good about it?" Holyfield asked. "That ain't normal. It is a choice, come on, that ain't the way nobody was made."

"If you were born and your leg were turned this way, what do you do? You go to the doctor and get it fixed back, right?"

"It's not about being fixed," Zissman responded. "That's just the way that you are."

"All I'm trying to say, you know handicap people are born, you can't say because they are born that way you can't fix them," Holyfield said.

In the show's confessional room, a producer warned Holyfield that Big Brother "does not tolerate the use of offensive language."

"Yeah, I understand why," Holyfield responded. "I forgot about the thing. I was just telling her my opinion. But it's not like I was gonna mention it to anybody else.That was just our conversation."

Response on Twitter was swift, with many viewers calling for Holyfield to be tossed out from the house.

"why has Evander Holyfield not been thrown out [of] the house!? Disgusting behaviour" a viewer messaged.

"Shame," wrote Boy George, "I had such admiration for Mr Evander Holyfield, he seemed dignified and I was sure he was a cool, smart, giant!"