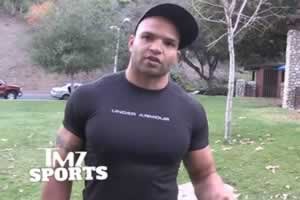 In a scathing op-ed published Thursday, Kluwe said that he was fired by special-teams coordinator Mike Priefer, whom he called a "bigot," and two "cowards": then-head coach Leslie Frazier and general manager Rick Spielman.

(Related: NFL's Chris Kluwe says he was fired over his support for gay marriage.)

Kluwe alleged that Priefer made several anti-gay comments in the course of objecting to his advocacy on the issue of marriage equality and quotes Priefer as saying during a team meeting, "We should round up all the gays, send them to an island, and then nuke it until it glows."

Priefer "vehemently" denied the charges and the Vikings said that Kluwe was released as a result of his "football performance."

Kluwe is "100% right," Ayanbadejo, also a marriage equality advocate, told TMZ Sports. "And I've been saying it all along, from the start."

"They basically told him to cease and desist, and to be quiet. And he said he wasn't going to do that. And [owner] Zygi Wilf, you know, praised him and told him he was doing the right thing, but the management, they believed otherwise. It ultimately led to him, you know, being basically ousted from the NFL."