Push to legalize gay marriage in Pennsylvania kicks off in Philadelphia 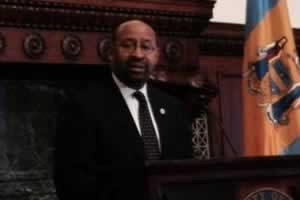 Philadelphia, PA - A campaign seeking to legalize gay marriage in Pennsylvania kicked off Wednesday in Philadelphia and Pittsburgh.

In Philadelphia, Mayor Michael Nutter was among those lending his support during a news conference for the Why Marriage Matters Pennsylvania campaign, which is sponsored by Freedom to Marry and the American Civil Liberties Union (ACLU) of Pennsylvania.

Nutter told attendees that he was proud that Philadelphia has the strongest LGBT civil rights protections of any city in America. He said that the campaign was "an important opportunity to grow support for marriage across the commonwealth."

Shawn Werner of Freedom to Marry said that the campaign is about "one-on-one conversations, which we know will increase support for marriage."

"In the coming months, we will hold town halls across the state and work with local leaders to build support for marriage," he said.

Pennsylvania is the lone Northeast state without marriage equality.

Efforts to move Pennsylvania into the marriage equality column include a marriage bill proposed by Democrats that faces a steep incline in the General Assembly and a number of lawsuits.