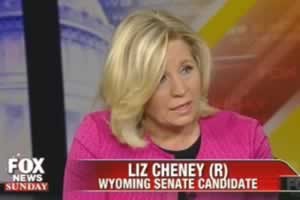 Cheney, who is challenging Wyoming Senator Mike Enzi in the upcoming Republican primary, was attacked in a TV ad for her stances on the issue.

After a male announcer describes cabler MSNBC as "the go-to network for Barack Obama and Washington's liberal elites," a clip of Cheney in a 2009 appearance on the network is played.

"In Wyoming, Cheney campaigns as a conservative," the narrator states in the ad. "In Washington, she appears on MSNBC to campaign against the marriage amendment and support government benefits for gay couples."

In an appearance Sunday on Fox News Sunday, Cheney said she is opposed to discrimination based on sexual orientation and allowing gay couples to marry.

Host Chris Wallace asked if it was a flip for her to come out against marriage equality after she publicly opposed amending the constitution to limit marriage to heterosexual couples and supported offering benefits to the same-sex partners of federal employees.

"Some of your conservative critics and, frankly, some of the Enzi people, say that you have flipped positions on some issues to try to attract voters that you didn't previously hold," Wallace said. "You now say that you oppose same sex marriage, but they point out that in 2009, you opposed a constitutional amendment – I know you say it's a state issue –constitutional amendment that would have banned same sex marriage and they point out that you supported the State Department offering benefits to same sex partners. They say that's a flip."

"It's not, and I stand by both of those positions," Cheney said. "I don't believe we ought to discriminate against people because of their sexual orientation. If people are in a same-sex relationship and they want their partner to be able to have health benefits or be designated as a beneficiary in your life insurance, there's no reason we shouldn't do that."

"I also don't support amending the Constitution on this issue. I do believe it's an issue that's got to be left up to the states. I do believe in the traditional definition of marriage."

Cheney's sister, Mary Cheney, who is married to a woman, has criticized her sister's position on the issue as "dead wrong."

"Listen, I love Mary very much. I love her family very much. This is just an issue on which we disagree," she said.