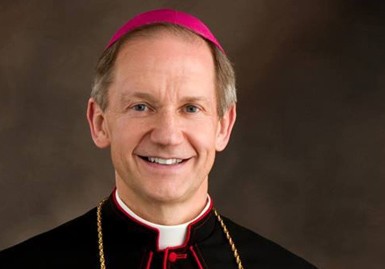 Springfield, IL - Bishop Thomas John Paprocki of Springfield says he will offer prayers of "supplication and exorcism" on Nov. 20 at approximately the same time that Illinois Gov. Pat Quinn signs the marriage equality bill into law.

In a news release on the Diocese of Springfield's website, Paprocki said will offer "Prayers of Supplication and Exorcism in Reparation for the Sin of Same-Sex Marriage" at the Cathedral of the Immaculate Conception in Springfield on Nov. 20 at 4 p.m.

Paprocki, who leads 130 parishes in 28 counties in central Illinois, stated that "since same-sex marriage is contrary to the plan of God, those who contract civil same-sex marriage are culpable of serious sin."

A vocal opponent of Illinois marriage equality bill, Paprocki added: "It is scandalous that so many Catholic politicians are responsible for enabling the passage of this legislation and even twisting the words of the pope to rationalize their actions despite the clear teaching of the church."

The prayers, according to the news release, come from the 2004 Latin edition of the Rite of Exorcism. A diocese spokesperson told BuzzFeed the "exorcism" is not what it may sound like.

"As a practicing Roman Catholic, I find it not only insane but embarrassing," Rick Garcia, policy director at The Civil Rights Agenda, told BuzzFeed.

"The bottom line is that he lost," Garcia added. "He should get over it."