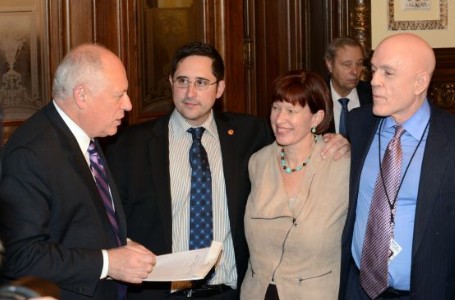 Historic signing ceremony to take place at UIC on Nov. 20

"Marriage equality is coming to Illinois," Gov. Quinn said. "I look forward to signing this landmark legislation on November 20 and celebrating a big step forward with the people of Illinois."

The Illinois House approved Senate Bill 10 on Tuesday by a 61-54 vote. The Senate easily approved the measure an hour later during a procedural vote. With Quinn's signature, Illinois will become the 15th state to allow same-sex marriages.

Quinn, a Democrat, supported the marriage equality legislation since it was first introduced by state Sen. Heather Steans (D-Chicago) and state Rep. Greg Harris (D-Chicago) earlier this year. In 2011, Quinn signed Illinois' civil unions bill into law during an event at the Chicago Cultural Center.

"I can only imagine the joy that tens of thousands of Illinois gay and lesbian couples, their children, families and friends will feel when the Governor signs the bill, officially ushering the historic law to Illinois," Equality Illinois CEO Bernard Cherkasov told ChicagoPride.com. "This has been a victory long-fought and hard-won, and the bill signing could not come any sooner."

The historic signing ceremony will take place at the University of Illinois at Chicago (UIC) Forum on November 20, 2013 at 3:30 p.m.

The celebration will be free of charge and open to the public. For more information, including how to attend, visit Equality.Illinois.gov.

For the second year in a row, UIC was recently named among the nation's top 25 campuses for lesbian, gay, bisexual and transgender students. UIC is the only institution in Illinois among the top 25 campuses. The UIC Forum is located at 725 West Roosevelt Road, Chicago, IL 60608.