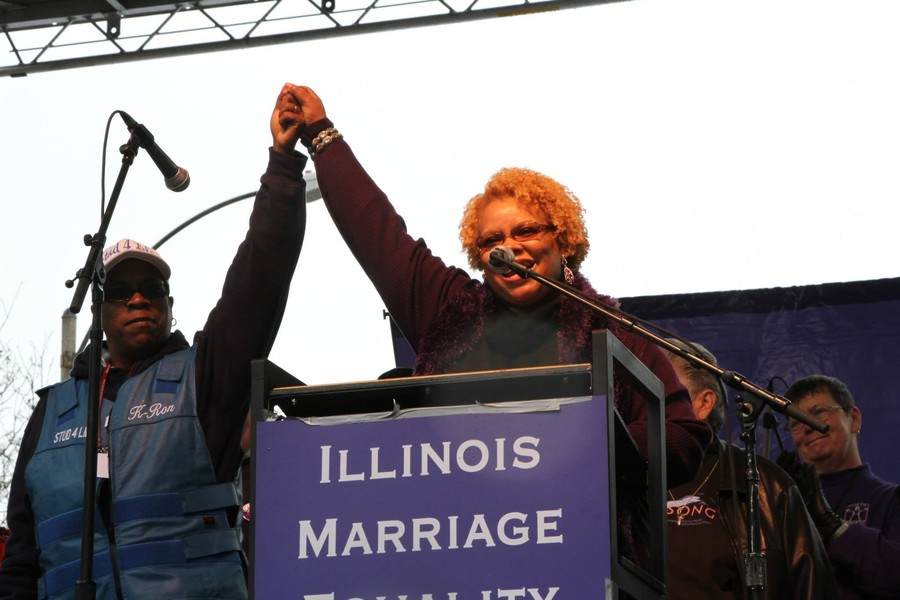 WATCH: March on Springfield for Marriage Equality (below)

Springfield, IL - Thousands of marriage rights advocates and allies braved the cold rain to rally outside the Illinois state Capitol as part of the March on Springfield for Marriage Equality, an event to mark the first day of the fall veto session.

Tuesday's rally and march was part of a broad grassroots strategy to secure final passage of the Religious Freedom and Marriage Fairness Act (SB-10), which cleared the Illinois Senate on Feb. 14, but stalled in the House on May 31.

"This is our hour, this is our moment," Democratic Gov. Pat Quinn told the record-breaking crowd. "We need love to sign a marriage equality law and I'll sign it as quickly as possible."

If passed by the House, Quinn's signature would make Illinois the 14th state to provide equal access to the freedom to marry. The governor signed Illinois' civil unions law in 2011.

Quinn was also among more than 15 political leaders to speak in favor of the bill during a press conference in the Capitol Rotunda. The press event was hosted by Equality Illinois and held in conjunction with the rally.

While holding a pen taken from his pocket, Quinn told reporters, "I am prepared to sign it as soon as the House of Representatives passes this bill."

It appears unlikely Quinn will get to use the pen this week as the first part of the veto session ends Oct. 23. Lawmakers return on Nov. 3.

"To me, marriage equality is a very simple issue. It is about just that: Fairness, respect, families and love," Madigan said.

Barr-Topinka, a strong Republican ally, told the crowd, "It's just a basic American right that we can marry who we want to marry. And that's just a fact of life."

Noticeable absent was Lisa Madigan's father, House Speaker Michael Madigan (D), who supports the measure but has yet to call the bill in the House.

"Mike Madigan's House failed us," said Andy Thayer, co-founder of the Gay Liberation Network. "We have a message to Mike Madigan, pass the damn bill this fall veto session."

Thayer continued his impassioned message, "It is time. It is time Mike Madigan!"

At one point the energized crowd started chanting, "Call the bill!"

Organizers and advocates remain cautiously optimistic that the measure will be called during the veto session. The architect behind the bill, openly-gay State Rep. Greg Harris (D-Chicago), has been unwilling to commit to a vote, which could push a marriage vote to 2014.

"It's time. We need to get this done," Harris told the rain-soaked crowd. "We need to extend the protections and responsibilities of marriage to all citizens in the state of Illinois." Only Harris can call for a vote and he gave no indication when he would call the bill.

A new poll released Monday by Equality Illinois shows a clear majority of Illinois voters support the legislation with significant majorities among African-Americans and Catholics.

Throughout the afternoon, in what became a three-hour rally, the politicians and speakers shared the stage with top LGBT musicians, including Steve Grand, Sami Grisafe and Stephen Leonard.

"We know our allies have always been diverse," said Baim. "There are people of all races for us and all races against us. We must not let them divide us."

As the Legislature's fall legislative session opened on Tuesday, opponents of the bill, including a small group of African-American ministers and the Catholic Church, launched a new series of robo-call targeting undecided members of the House Black Caucus.

"I need to apologize, as a clergyman, and as a Bishop in the Lord's church, for the arrogance and ignorance and the obstinance that we have had for so many years," Pearson said. "For the abuse, the mistreatment, the demeaning attitude we've had toward gay people.

"I apologize on the behalf of millions who may not feel the courage to say 'I'm sorry.' We did not treat you right. We have not treated you right -- and that day is stopping now," he said.

The rally concluded as Illinois families lead supporters on a march around the Capitol.

Police estimated nearly 3,000 people participated, while organizers believe that estimate is low and missed the nearly 500 people inside the Capitol at any given time. Organizers set the crowd estimate at around 5,000.

Gay rights advocates agree that the march was the largest LGBT rights event ever staged in Springfield.

Equality opponents are scheduled to rally on Oct. 23 in Springfield.