Mother kicked out of church for refusing to condemn lesbian daughter 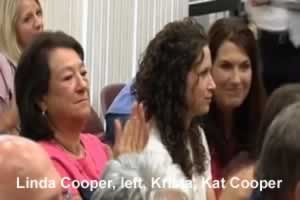 Collegedale, TN - A Tennessee church has banished a member for refusing to publicly condemn her lesbian daughter.

Linda Cooper's church of six decades, Ridgedale Church of Christ, instructed her to publicly condemn her daughter's lifestyle as a sin against God, or face expulsion.

Linda refused and was barred from attending the church.

"It has been days and she's still crying," Linda's husband Hunt Cooper told the Times Free Press. "It's almost like losing a family member."

The church gave its ultimatum after Linda publicly supported her daughter Kat Cooper's campaign to have her employer, the city of Collegedale, recognize her marriage to Krista. The couple married in Maryland this spring after spending 11 years together. On August 5, the city approved extending benefits to the spouses of gay workers, making it the first city in Tennessee to adopt such a policy.

"My mother was up here and she sat beside me. That's it," said Kat Cooper, a city detective. "Literally, they're exiling members for unconditionally loving their children."

"You certainly can't condone that lifestyle, whether it's any kind of sin – whether they're shacked up with someone or living in a state of fornication or they're guilty of crimes," Willis said."You don't condone it. You still love them as a parent."

"There's no sin to repent for," Hunt Cooper said. "And she's not going to turn her back on her daughter."