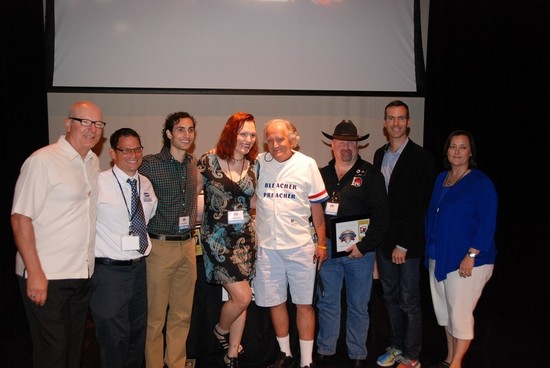 photo credit // ken brown
Chicago, IL - The National Gay & Lesbian Sports Hall of Fame, the first of its kind in the United States, recognized its first class of honorees during a ceremony Friday at Chicago's Center on Halsted.

"The National Gay & Lesbian Sports Hall of Fame's mission is to recognize both individuals and organizations whose achievements and efforts have enhanced sports and athletics for the LGBT community," Executive Director Bill Gubrud told ChicagoPride.com. "In addition, the Hall of Fame will preserve the history of LGBT individuals who have impacted professional and amateur sports and provide outreach and education to the sporting world so that LGBT youth all across the nation feel welcome and safe to participate in any and all athletic-related activities."

The Chicago Cubs were inducted into the Hall of Fame for being the first professional male sports team to place an ad in a gay newspaper in the country in 2000; hosting Gay Games VII at Wrigley Field in 2006; the first professional male sports team to have a float in an LGBT pride parade in 2010; and first team in Major League Baseball with an openly gay owner—Chicago Cubs board member and Chicago Cubs Charities chair Laura Ricketts.

"We are honored to be included in the inaugural class of the National Gay & Lesbian Sports Hall of Fame," said Ricketts. "When you look at the other impressive and talented individuals who were selected for this great distinction, we feel very special to be included among these great pioneers in sports."

The induction ceremony was held in conjunction with Saturday's Out at Wrigley, the nation's largest gay day at a major league sporting event.