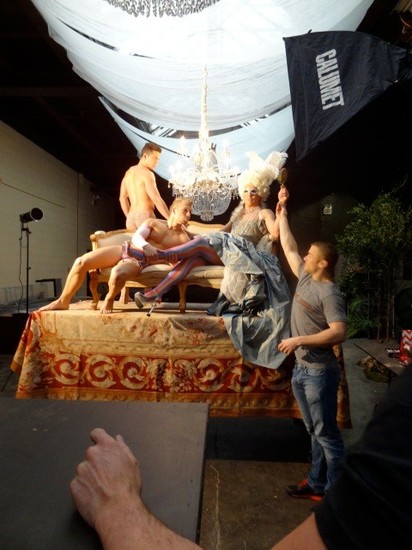 photo credit // bret grafton/cmp
Chicago, IL - Are you dying to try a cronut, but not willing to risk your well-earned Pride waistline for Dominique Ansel's new confection (or one of its yummy Chicago knockoffs)? Look no further! Matthew Harvat and Circuit MOM Productions (in partnership with the Vienna Tourism Board) are cooking up something sweet for the latest installation of the immensely popular "Revolution" parties at the House of Blues this coming Saturday.

"Jawbreaker" is the 12th "Revolution" party since their inception at Pride three years ago. Harvat, alter ego Circuit MOM, is known for bringing the larger, circuit party feel of the coasts to Chicago with international DJ sets and elaborate themes that include costumes, dancers, lighting effects and unforgettable stage shows. "Jawbreaker," Harvat promises, will be the most elaborate and exciting, decadent and lavish party so far -- and with inspirations like the Viennese princess turned fashionable French queen Marie Antoinette, it's no surprise.

(Posts on Circuit MOM Productions' Facebook reveal a two story set design, 12 dancers, lasers and four VW Beetle sized chandeliers that move -- and that was just the third rehearsal. The queen of the five foot wig would be proud.)

"So far, we have been to the Wild West, we have glowed in neon, been saved by a superhero or two, survived zombies and gone to a very scary circus," Harvat told ChicagoPride.com, recalling the themes of parties past over Pride, IML, Halloween and Market Days weekends when his parties have taken place.

"The events have taken on a bigger presentation than we could have ever imagined," Harvat said. "Set builders, web/graphic teams, three costumers, a specific custom light design that is different for each theme and party, plus an international talent pool of dancers, DJ's and team members that is beyond belief."

Saturday's event is also the American edition of an existing party series in Europe called "Vienna Candy." Florian Order from the Vangardist Magazine in Austria, a Facebook friend of Harvat's, proposed that the Vienna Tourism Board expand their LGBT tourism campaign overseas to the United States and asked Harvat to help produce a joint party. The result is an extravagant and lavishly designed one-night-only affair "celebrating everything sexy and sweet."

"We jumped at the chance to work with them because it brings a whole new element to not only our events, but to Chicago's Gay Pride celebration," Harvat said. "The 'Vienna Candy' party series has hit London, Berlin and Paris. Now, thanks to Florian, Chicago has been added to this prestigious list of cities that Austria is working hard to promote themselves in as a highly desired LGBT travel destination."

Beats will be spun by DJ Billy Lace, a resident DJ for MATINEE North America and native of New York City who was recently featured at Miami's Winter Party Festival and Discotekka, XL Nightclub in New York and Fly in Toronto. He also appeared at Hydrate earlier this year and at Matinee Las Vegas Festival over Memorial Day Weekend. Regarded as one of the hottest rising stars in the electronic music scene, Billy is known for his high-energy blend of vocals and driving bass lines and his legendary marathon sets that pack dance floors all night long. He will be joined onstage by the decadent Vienna Candy Boys who've come all the way from Austria to move, shake and celebrate for Chicago Pride.

"Jawbreaker" is set for Saturday June 29 at the House of Blues, 329 N Dearborn Street, in River North. Doors open at 10 p.m. and the party rages all night until the House of Blues closes at 5 a.m. Tickets are available for $40 in advance at www.houseofblues.com/chicago or $50 at the door.

Check out the event's Facebook page for more information.