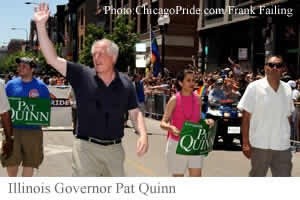 On Friday, the session's final day, Rep. Greg Harris, the bill's champion in the chamber, surprised activists when he announced that he would not call the bill for a vote. Harris choked back tears as he explained that he had assurances from colleagues that they would support the measure in the fall and pledged to call a vote on the bill in November.

The Senate approved the measure on Valentine's Day and Quinn, a Democrat, has pledged his signature.

In his first remarks on the issue, Quinn said the chamber should have taken the vote.

"I was very disappointed that a vote was not taken Friday," Quinn told reporters on Tuesday. "I think that it should have been taken. That is what democracy is all about."

Quinn did not indicate if he'll call lawmakers back for a special session.