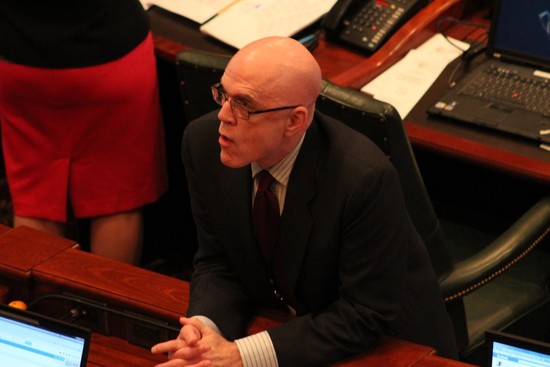 "I felt it was time to explain that both Rep. Harris and Windy City Times have separate roles in this process, but that does not mean we can't do so respectfully," explained Baim. "I also wanted to clarify to him that I did not ask for him to resign, despite misinterpretations of my editorial, but that I stand by my editorial position on what steps should happen next."

"We as a community can work together for the common cause of marriage equality, even if we have differences of opinion on strategy and tactics. We both have a respect for the role that each aspect of the community plays, including elected officials, activists, donors and the media. All those things are needed to achieve full equality. We urge the community to understand that disagreement is part of our work, but we can all still be civil and achieve success. When there are disagreements, it is about politics, it is not personal. In the years of ACT UP, the successes against HIV/AIDS came because of work from all sides of the community--those in the streets, those in the suits, those in the media, and those in power. We must unite fiercely as a community and focus our efforts on carrying the beacon of hope and equality for all families, and against those who wish to defeat the full promise of America for all her peoples."

The Illinois House adjourned its spring session Friday without voting on SB10, the Religious Freedom and Marriage Fairness Act, which would have made Illinois the 13th state permitting same-sex marriage.

Advocacy groups and LGBT community members were outraged. The Gay Liberation Network and The Civil Rights Agenda held a somber protest Saturday evening on Chicago's North Side, where an impassioned Rick Garcia blamed lobbyist for the bill's failure.

"The top donor to the Democratic party hired all of these contract lobbyist, straight white men, who don't know shit," Garcia told the crowd of about 100 people.

Harris and House Democrats also shared the heat during the protest.

Since Friday, people have taken to social media, including Facebook, to express their frustration, with a large number of the posts peppered with personal attacks.

"Social media provides a quick way to attack people personally, something that is relatively new to the political process, and it can really cause deep divisions not easily healed," Baim told ChicagoPride.com.

Red Eye columnist and ChicagoPride.com political editor Waymon Hudson agreed that the LGBT community has suffered a setback in the fight for full marriage rights, but he added, "We are not defeated."

"While it is important to look at how this happened, it is even more important to look forward to how we can come together to get this bill across the finish line," said Hudson. "Our opponents wants us to dissolve into blame and internal division, but as a movement we know we are stronger together than apart. It will take all of us and our allies to finish the job and get marriage equality for all in Illinois."

The marriage equality bill was not defeated, nor is it dead. Before adjourning late Friday night, House Speaker Michael Madigan signed a deadline extension to SB-10, which means it can still be voted on until the end of August. However, the vote could only occur if Governor Pat Quinn were to call a special summer session. Otherwise the bill could return in the November veto session.

The Homopolitico: Hudson's full take on the state of marriage equality in Illinois