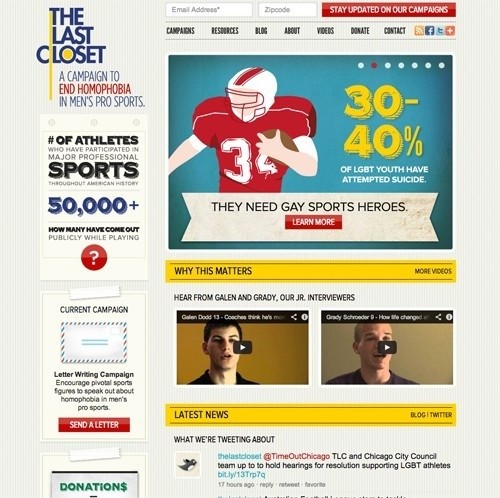 photo credit // thelastcloset.org
Chicago, IL - The Chicago City Council unanimously passed a resolution Wed., May 8 that encourages the Commissioners from major sports leagues to support their gay players, invite them to come out and to ensure their safety.

"The unanimous passing of this resolution in support of LGBT athletes and The Last Closet campaign by the Chicago City Council, signifies the changing tides in LGBT professional sports," said Fawn Yacker, project director of The Last Closet, a San Francisco-based campaign dedicated to fighting homophobia in professional sports. "An environment that was once considered the last closet, seems to be getting the encouragement and support it will need to shed that reputation and join the rest of this culture as it embraces the values of tolerance and inclusion."

Yacker worked with Alderman Joe Moore (49th), who introduced the resolution on April 10.

The measure was presented to the full council after it passed unanimously at the Human Relations Committee hearing on Tues., May 7, where openly-gay Alds. Tom Tunney (44th) and James Cappleman (46th) expeessed support.

The resolution in support of LGBT professional athletes asks the commissioners of the five major sports to invite their players to come out and provide safety nets for them once
they do.

"We ask that they make these statements on camera," Yacker told ChicagoPride.com. "Visibility is the key to breaking down the underpinnings of anti-gay behaviors."
Only one league commissioner, Gary Bettman of the National Hockey League, has publicly welcomed gay athletes within the NHL to come out if they choose to do so. In light of Jason

Collin's announcement last week, Yacker said that it is vital that the other four league Commissioners prepare for the inevitability of more players coming out.

Chicago becomes just The Second City to declare its backing for LGBT athletes. San Francisco was the first in October 2002.

WHEREAS, the City of Chicago has been the proud home to seven professional sports teams that have electrified and united our city: Cubs, White Sox, Bears, Sky, Bulls, Blackhawks, and Fire; and,

WHEREAS, Chicagoans of all genders, races, and classes, celebrate our teams' accomplishments as shared victories, yet gay professional athletes feel the need to remain closeted; and,

WHEREAS, the U.S. military, once one of the last bastions of discrimination against LGBT individuals, now recognizes the need to address prejudice openly, instead of assuming it does not exist; and,

WHEREAS, the Chicago Cubs and Chicago Blackhawks, recognizing the importance of inclusion, began participating in the annual Chicago LGBT Pride Parade in June 2010; and,

WHEREAS, Gary Bettman, the commissioner of the National Hockey League (NHL), became the first major-league commissioner to state on camera that he welcomes gay athletes to his league and that he will set up educational programs in the interest of safety for the athletes.

WHEREAS, National Football League Commissioner Roger Goodell has implemented additions to their longstanding anti-discrimination policies saying: Posters will be displayed in locker rooms of all 32 teams conveying the NFL's anti-discrimination policy, while the league will conduct training on the matter – including for rookies and those involved in hiring and scouting new players – and strengthen protocols concerning the reporting of complaints of discrimination or harassment by players.

WHEREAS, Robbie Rogers, a former professional soccer player for the Chicago Fire, who came out as gay at the same time he announced his retirement would be welcomed back to the Fire as evidenced by Fire Coach Frank Klopas' statement: "Should Robbie want to return to the game, we would still be open to him being part of the Fire"; and,

WHEREAS, Jason Collins, a free agent player in the National Basketball Association (NBA) came out in April of 2013 as the first professional male player in any of the five major US sports to do so publicly while actively playing, and,

WHEREAS, Bias-based harassment is far too often complicit in the disturbing number of LGBT youth taking their own lives; and,

WHEREAS, Our LGBT youth need LGBT sports heroes, in addition to other influential role models; and,

WHEREAS, With this in mind, the Last Closet Project campaign leadership, under the auspices of the nonprofit organization Woman Vision, is seeking interviews with all the major league sports Commissioners for the purpose of filming a statement of affirmation for LGBT athletes; now, therefore,

BE IT RESOLVED, That we, the Mayor, and members of the City Council of the City of Chicago respectfully request that the Commissioners of Baseball, Football, Basketball, Hockey, and Soccer use the authority of their office to sanction players who have engaged in specific incidents of slurs and intolerance toward LGBT athletes; and,

BE IT FURTHER RESOLVED, That the Commissioners state in a public interview their support for LGBT players and invite them to come out and, once they are out, pledge to make them safe and accepted; and,