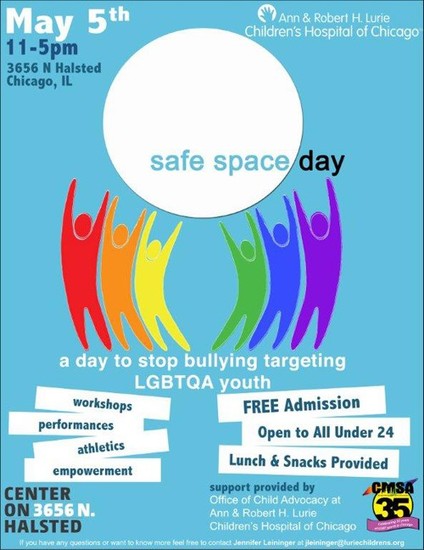 Safe Space Day kicks off Sunday, May 5 at Center on Halsted

Chicago, IL - On Sunday, May 5, the Center for Gender, Sexuality and HIV Prevention at Ann & Robert H. Lurie Children's Hospital of Chicago is holding its first, and hopefully annual, Safe Space Day at the Center on Halsted. Sunday's event brings together several Chicago-area organizations for a series of workshops and events that vary from athletic to artistic and are aimed towards empowering LGBTQ youth (ages 13-24) and connecting them to important resources in their community as well as with one another.

"A lot of young people aren't privy to spaces that adults have like bars or social clubs where they enter a space and know everyone in the room is LGBTQ," Zach Stafford, Behavioral Research Associate at Lurie Children's and one of the event's primary organizers, told ChicagoPride.com. "Safe Space will allow them a time to be around a lot of other people just like them."

Safe Space Day kicks off Sunday at 11 a.m., with an opportunity for people to eat, socialize and explore the Center on Halsted, where Cyon Flare and the Chicago Sky WNBA team's mascot, Sky Guy, will be posing for pictures. The opening ceremonies at noon will lay out the day's plans and also include a short performance by Chicago's About Face Theatre. Then comes the main event: from 1 to 4 p.m. there will be three sessions of workshops and activities for young people to attend, all organized by a host of Chicago-area organizations.

Safe Space Day's events include filmmaker Lauren Lubin screening her documentary "We Exist," as well as a screening of "Coming Out", an interactive documentary project shot mostly in New York City last year. Stafford, who appears in the film, will lead a talk-back discussion on coming out and bullying after the showing. Lambda Legal is holding a workshop teaching young people their rights around freedom of speech as well as in school and The Broadway Youth Center is providing a space where young people can hang out and learn methods of self-care. A cooking workshop will help youth learn to make healthier eating choices, while another focuses on stopping violence before it starts.

Former NFL player and out gay man Wade Davis will be running the athletics workshops with the Chicago Metropolitan Sports Association. This portion of the day will act as a preview and soft launch for YOU! Belong LGBTQA Youth Sports and Leadership Initiative. Organized by Wade Davis and Darnell Moore, YOU! Belong is a four day sports camp focused on empowering LGBTQ and straight-ally youth which will premiere here in Chicago this July.

"Their involvement in taking on the sports aspects of our Safe Space Day really inspired our team to really work hard to make sure this day was a success, while also allowing for something new and truly exciting to come to Chicago for the first time ever," Stafford said.

A recent national survey shows that eight of 10 LGBTQ students experienced harassment at school in the past year because of their sexual orientation, and three-fifths feel unsafe at school for the same reason. This fact, and others, drive why the Lurie Children's staff got together to organize this event. Dr. Travis Gayles, MD, PhD, is a physician and fellow at the hospital, where his research and his main interests focus around the affects of bullying within youth populations. Stafford and Academic Coordinator Jennifer Leininger have both worked with LGBTQ youth for years and have witnessed the explicit ways in which bullying affects youth in a multitude of ways.

"We really wanted to give young people a space where not only did they feel safe, but also empowered. The workshops and activities during this day aim to do both," said Stafford, who explained the idea behind Safe Space Day using the ‘teach a man to fish' proverb -- instead of making youth reliant on authority figures, Safe Space Day aims to give youth to tools to handle these situations themselves. "If we teach our youth empowering and thoughtful ways to handle bullying, then hopefully we can see changes in the ways bullying affects young people, and maybe we can see a decline in bullying."

Safe Space Day has been a true community effort. The staff from the Center on Halsted joined the folks from Lurie Children's to help conceptualize the day and how it would work within the Center's space while The United Way, PFLAG and others organized volunteers to be present for the event. During planning, a "call for proposals" sent out to agencies throughout the city attracted the attention of the local organizations participating on Sunday, all of whom developed the workshops they will be presenting.

For more information about the YOU! Belong LGBTQA Youth Sports and Leadership Initiative, visit youbelonginitiative.com.