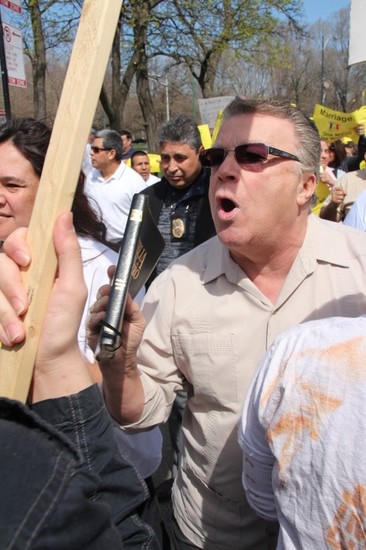 Robert Castillo: 'My Logan Square is welcoming and accepting'

Chicago, IL - The battle over marriage equality in Illinois took to the streets of Chicago's Logan Square and Humboldt Park neighborhoods Saturday, April 27, during a mostly peaceful exchange between pro- and anti-gay rights groups.

Supporters of equal marriage rights for same-sex couples held a counter-protest against a rally led by the anti-gay Illinois Family Institute (IFI). The protest started at Palmer Square Park, 2200 N. Sacramento Ave., before spilling out onto Humboldt Blvd.

Nearly 200 protesters, primarily Latino, prayed and listened to preachers, who told the crowd that the fight was over the "rights of the church."

"We are God's warriors fighting for Christ," chanted the crowd in Spanish.

Andy Thayer, co-founder of the Gay Liberation Network, argued that the LGBT community has long advocated for the Latino community and immigration rights, something he said IFI has opposed.

"I know not just myself, but many people here on our side, are proud to have marched many times in Chicago's annual immigrant rights marches," Thayer told the crowd. "This is about equal rights for all."

At about 11 a.m., both sides began marching down Humboldt Blvd. as anti-gay protesters carrying Bibles, religious symbols and signs provided by IFI were flanked by over 100 gay rights advocates. Supporters carried rainbow flags and signs that included a number of pro-equality messages.

"Equal Rights for All," shouted pro-gay demonstrators as they marched down Humboldt Blvd. to North Ave. Despite a couple of tense exchanges, the demonstration remained peaceful.

"What we're seeing here today is a very cynical attempt by the Illinois Family Institute to divide-and-conquer," Thayer told ChicagoPride.com.

Eric Highers, a Latino, and his friend Shelley DeHosse were among the gay rights supporters.

"I'm here to make my voice louder than the bigotry expressed today," Highers told ChicagoPride.com. "The LGBT community overlaps on other communities and I stand in solidarity of marriage equality."

The demonstration was personal for Robert Castillo, a longtime LGBT Latino activist and Logan Square resident.

"Me and my partner were both born and raised in Logan Square. He passed away last year and we'd been together for over 20 years. To have anti-gay folks come to Logan Square is an insult to me and his memory," said Castillo. "My Logan Square is welcoming and accepting."

The march ended without incident just before 12:30 p.m. when the anti-gay demonstrators gathered for a religious celebration in the parking lot of Casa Puertorriqueña at 1237 N. California.

Thayer said his group will continue to counter the anti-gay demonstrations organized by IFI.