Scott Fujita: My support for gay marriage is based on a Christian message of love 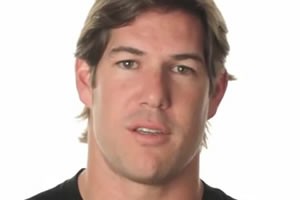 The 33-year-old father of three wrote in an op-ed published Saturday in The New York Times that he's not prepared to answer one question from his curious daughters: "Why aren't Clare and Lesa married?"

"I don't know how to explain to them what 'inferior' means or why their country treats our friends as such," Fujita wrote. "I don't want to tell them that 'Yes, our friends love each other just like Mommy and Daddy love each other, but that their love is considered 'less than.'"

"I support marriage equality for so many reasons: my father's experience in an internment camp and the racial intolerance his family experienced during and after the war, the gay friends I have who are really not all that different from me, and also because of a story I read a few years back about a woman who was denied the right to visit her partner of 15 years when she was stuck in a hospital bed."

"My belief is rooted in a childhood nurtured by a Christian message of love, compassion and acceptance. It's grounded in the fact that I was adopted and know there are thousands of children institutionalized in various foster programs, in desperate need of permanent, safe and loving homes, but living in states that refuse to allow unmarried couples, including gays and lesbians, to adopt because they consider them not fit to be parents."

"In articulating all my feelings about marriage equality, I almost don't know where to begin. And perhaps that's part of the problem. Why do we have to explain ourselves when it comes to issues of fairness and equality? Why is common sense not enough?"