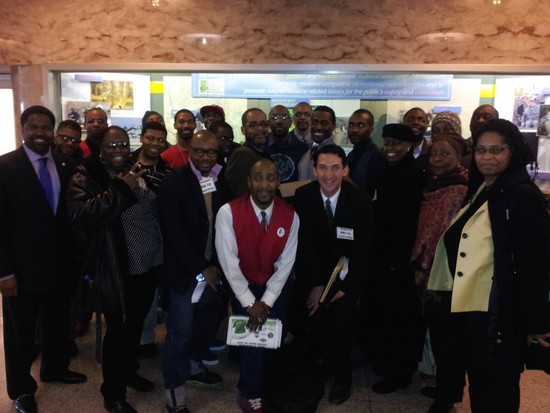 Springfield, IL - Members of the Chicago Black Gay Men's Caucus (CBGMC) traveled to Springfield Wednesday to lobby support for The Religious Freedom and Marriage Fairness Act, especially among black lawmakers who have been targeted by anti-gay activists and church leaders.

"Given the unequivocal data on the marginalization of black men, as well as that of the gay community, it should come as no surprise that black gay men face unparalleled discrimination and stigma at every turn," the organization said in a statement. "Coupled with structural factors such as poverty, unemployment, racism, and homophobia, the community of black gay men in Illinois carry the highest burden of new HIV infections, adding another, perhaps more complex component of marginalization."

Members of the black gay and lesbian community spoke with members of the Illinois General Assembly black caucus, many of whom have been lobbied recently by opponents of the marriage equality bill.

"It was very heartening to see community members take time to come down and lobby the black caucus," said Anthony Martinez, executive director of The Civil Rights Agenda. "We have heard black representatives say that marriage equality is not an African American issue, so it was very important for them to see these folks and hear their stories. The Civil Rights Agenda has been working to build support in communities of color, because this issue affects more than just the North Side of Chicago. This is about families all across Illinois."

In a statement, CBGMC further explained its reason for pushing lawmakers to vote in favor of the bill.

"The black gay community has a unique appreciation for how far we have come, and we continue to push forward to achieve full equality in society. We have fought for issues of justice and equality as members of the broader LGBT community—from Stonewall, to the elimination of anti-gay policies, to the fight to reduce HIV incidence and other health disparities. We also know the history of our culture—from the Middle Passage, to slavery, to Jim Crow, to voting rights. At one time in American history, slaves were considered 3/5 of a person and were denied the right to marry. Only within the last half-century were inter-racial marriages fully legalized."

A coalition of African-American churches lead by the outspoken Rev. James Meeks, a former state senator and pastor of Salem Baptist Church, said March 5 that lawmakers voting for gay marriage would not be welcome to speak or visit.

"Too often, traditional institutions (including, but not limited to some political and faith­based communities)—whether or not they acknowledge it—consume Black gay men's time, talents and money," CBGMC said in the statement. "Publicly, these institutions fuel support for discriminatory policies against us as we seek the same social justice and equal protections under the law to which we are all constitutionally guaranteed as American citizens."

The statement argued that marriage equality would offer LGBT youth of color "societal legitimacy and its many benefits."

"For LGBT youth of color who face bullying and violence, marriage equality offers a new hope for achieving the ultimate aspiration for their relationships and a legal foundation upon which they can build happy, loving families," the statement read.

CBGMC's twenty-­three member Board of Directors represents a range of professions, socio­economic statuses, and community concerns that reflect and represent a diverse community of tens of thousands of Black gays and lesbians in Illinois.