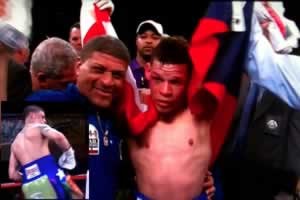 Puerto Rican boxer Orlando "The Phenomenon" Cruz on Saturday won his second bout since coming out as gay.

It was an emotional fight for Cruz who entered the ring to fight Mexican boxer Aalan "The Bomber" Martinez wearing his pride: A boxing kilt adorned with a Puerto Rican flag on one side and on the other a rainbow flag, a symbol of gay pride.

Cruz won the bout at the Civic Center in Kissimmee, Florida with a sixth-round technical knockout.

In a series of tweets, Cruz messaged: "My thanks to God for giving me the victory and for never abandoning my grandma and to her whom I felt next to me the entire time. I love you old lady. To my work team, Puerto Rico, the LGBT community, my people from Quintana and my family: Thanks for being there and being part of my life. I love you and carry you with me."

According to Blabbeando, Cruz went out of his way to display to the crowd the rainbow flag on his trunks.

"When I went out with that [rainbow-colored Dominican] flag I knew there was a chance I could be arrested and that I would not get the help of the LGBT community, but even though I knew I was at risk it didn't really matter to me," he said in a Facebook post. "I take strong stands because it is my hope that when Dominicans read my words they'll want to change their ways."

At the end of the fight, Cruz's father entered the ring and embraced him. The two men reportedly had been on the outs since Cruz announced he's gay.