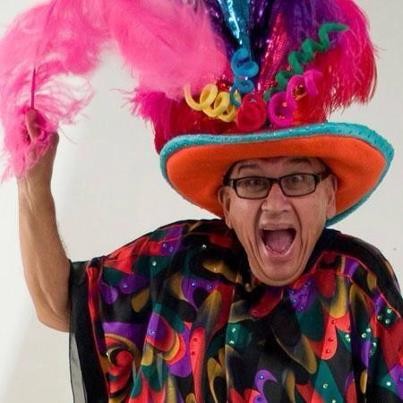 Irvine, CA - Chicago (and worldwide) cabaret favorite, Rudy de la Mor, died at Kaiser Hospital in Irvine, Calif. on March 5. Rudy played to packed houses at Gentry for more than 20 years. He was 73.

Craig D. Goldsmith, a fellow entertainer, posted on Facebook, "A great many tears will be shed for the loss that we feel right now. A great amount of joy must also be spread to have known someone so special! Also to know that his was a life well lived and lived well!"

A classically trained pianist, de la Mor was a child prodigy who performed with the Orange County Symphony Orchestra and the Denver Symphony Orchestra. He was discovered by the late vaudeville a, film and television star, Jimmy Durante. As Durante's protégé, de la Mor became close friends with a number of stars of the era, such as Martha Raye, Alice Faye, Christine Jorgenson and others.

It was Martha Raye who was the impetus for the outrageous hats and sequined attire that became his trademark. After catching one of de la Mor's early sets as a cabaret performer, she suggested that he focus on the comedic aspects of his act.

"What's more, she suggested that I wear some of the curtains my mother might have had and change hats all night long," de la Mor reported on his website.

He was known for his interaction with his audience and had the phenomenal ability to remember the name of everybody in the room in which he was performing. He was a favorite in LGBT clubs and performed on a number of straight and gay cruises. He had planned to take part on a cruise March 9.

On Feb. 5, he posted on his official Facebook page, "To all my dear friends: Thank you all so much for your kindness and support as I slowly recover from my illness. Your thoughts and prayers have given me strength and encouragement. I shall see you soon!! Woooosh! Love Rudy."