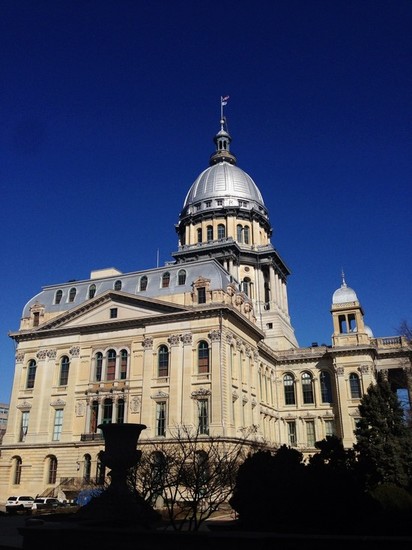 Springfield, IL - Valentine's Day 2013 will be a day to remember for Illinois gay and lesbian couples after the Illinois Senate approved the Religious Freedom and Marriage Fairness Act by a vote of 34-21 on Thursday.

The bill now advances to the Illinois House where opposition is expected to be more formidable. But Gov. Pat Quinn has said that he would sign the bill into law, and urged its passage in his State of the State address.

"I want to thank Senator Heather Steans and Representative Greg Harris for their work to move Illinois forward," he said. "Let's pass this bill for marriage equality."

Steans, a Chicago Democrat, was the sponsor of the Senate bill (SB-10). Harris (D-Chicago) will sponsor the legislation in the House.

Today's vote is further indication of growing support for gay marriage in the state. Polls show about 47 percent of residents support the cause, while 42 percent are opposed. Even the members of the state GOP have weighed in with support; party Chairman Pat Brady has lobbied on behalf of the measure, to the objection of several of his colleagues.

Nine states and the District of Columbia recognize same-sex marriage. If Illinois approves gay marriage nearly twenty percent of the U.S. population will live in states recognizing marriage equality, according to the Human Rights Campaign.

Read more from the Senate debate and vote

Community leaders and politicians have released responses to the Senate's approval of Senate Bill 10:

"Today is a monumental and historic day not only for Illinois' LGBT community and allies, but for the future of our entire state. By voting to approve marriage equality, the Illinois Senate reaffirmed our most basic commitments to fairness, justice, and a government free of discrimination. The enormity of today's vote cannot be overstated.

"Now that the Senate has done the right thing, it's time for the House to follow suit. There are simply no excuses left. Public opinion continues to drastically shift in support of marriage equality. One by one, states are legalizing same-sex marriage and voters are going to the polls to reject discriminatory marriage initiatives. Our President has urged us to take action. If that's not enough, Illinois' own 2010 civil union law has proven only that good things happen when we extend equal rights to citizens.

"I congratulate my Senate colleagues and the advocates who have fought so hard and so long for an equal Illinois. I look forward to the day – hopefully in the very, very near future – in which I get to cast my vote for equality on the House floor. It will, without a doubt, be one of the most meaningful votes I take as a legislator and will put us on the right side of history."

"This is an historic moment and demonstrates once again that Illinois is the land of Lincoln - fairness justice and equality for all. Just two years ago we thought this day was years away, but here we are and I am humbled to be sitting here today. This is an important step, but there is still more work to do. As we turn our attention to the House of Representatives we are working to make sure that they will pass it and the Governor is waiting to sign it."

"It's time for marriage equality in Illinois, and I thank Sen. Steans for her leadership and the Senate for taking this decisive action to ensure equality for all families. People across Illinois recognize the importance marriage plays in protecting and recognizing families, and the Senate has heard that message loud and clear."

"While this historic day is only half the battle, the Senate today put Illinois on the road to recognizing that, as President Obama said in his inaugural address, 'the love we commit to one another must be equal'."

Cherkasov praised and thanked state Sen. Steans for her expertise in moving the bill through the chamber from introduction to passage. "Sen. Steans, always a passionate voice for LGBT equality, has earned our gratitude, and we congratulate her," Cherkasov said.

"The freedom to marry the person you love is one that should be afforded to all citizens and, for too long, has been denied to our gay and lesbian brothers and sisters. When two people love each other, no government entity should stand in the way of letting them express that love. It is time that our laws reflect our values and I am so proud that on this Valentine's Day, the Illinois Senate has voted to approve gay marriage. I commend Senator Heather Steans and Representative Greg Harris for their work on this and I urge the Illinois House to take up this bill in the same bi-partisan fashion."