Donald Trump: Gay marriage is not my thing 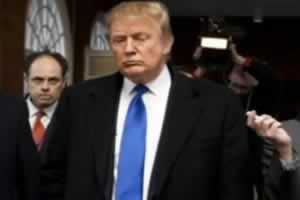 Real estate mogul and television personality Donald Trump has said that gay marriage "is not my thing."

"Donald, go on the record," Stern said. "You're for gay marriage."

"Well, I'm not," Trump responded. "It's never been an argument that's been discussed with me very much. People know that it's not my thing one way or the other."

During Trump's brief flirtation with a run at the White House as a Republican, he said he was opposed to marriage and civil unions for gay couples. Trump said he opposed marriage equality because he doesn't "feel good about it."

In response, actor George Takei, who appeared on Trump's reality show Celebrity Apprentice and is openly gay, said he believes Trump could come around.

Takei wrote about talking to Trump about the issue in December.

"Friends," Takei wrote on his Facebook page, "I had lunch with Donald Trump today at the Trump Tower Grill. It was a lively and engaging hour-long conversation that touched upon his personal position on marriage equality. He confided that he recently attended a same-sex wedding and that he'd found it 'beautiful.'"

"I remarked that NY is now a marriage-equality state, and that after that, marriage is better for business! Minds are changing across America, and I am always ready to speak to those ready to listen. I hope my chat with The Don might have some effect on his stance on the subject," he added.