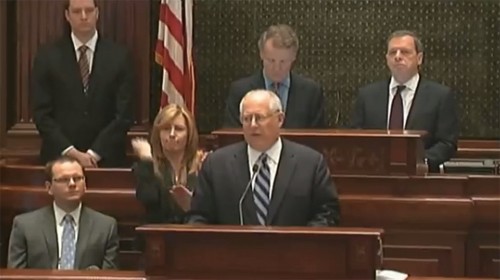 SPRINGFIELD, Ill. - Gov. Pat Quinn renewed his support for gay marriage during the annual State of the State address. The Democratic governor urged lawmakers to pass the marriage equality bill currently before the General Assembly.

"Our Illinois is not a land of discrimination," Quinn said as he delivered his fourth State of the State address.

"Four years ago nobody thought civil unions would be possible here. Today civil unions are the law in our state and nearly 5,200 couples across 94 counties have joined in civil unions.

"Now it's time to take the next step to achieving full equality. Marriage equality is coming to Illinois.

"And yesterday was a great start in the Senate Executive Committee. I want to thank Senator Heather Steans and Rep. Greg Harris for their work to move Illinois forward.

"Let's pass this bill for marriage equality and let's do it now," said Quinn.

A bill legalizing gay marriage passed the Senate Executive Committee on Tuesday by a 9-5 vote. The bill sponsored by Steans will now be considered by the full Senate where a vote is expected on February 14.

Quinn has said he would sign the bill into law.

During the address, Quinn also called on lawmakers to raise the state's $8.25 an hour minimum wage to $10 an hour during the next four years, tighten gun control and allow online voter registration.

"We are very lucky and grateful to have a Governor that is very supportive of the LGBT community," he said. "Governor Quinn fought for civil unions and ensured its passage and he is now fighting for equal marriage. When speaking with the Governor he is very emphatic and is committed to getting this done."

Related from Windy City Times
Where are your senators on equal marriage?
Where is your state rep on marriage equality?