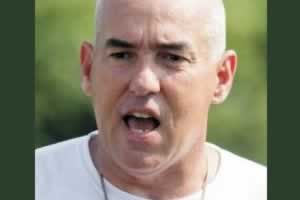 Audio of Grisham expressing his distaste for queers and calling Obama "fat butt Michelle Obama" was released on the Internet earlier this week.

In the audio, Grisham is heard blaming Obama for the school's 600-calorie lunches.

"Fat butt Michelle Obama," Grisham told his students. "Look at her. She looks like she weighs 185 or 190. She's overweight."

Another voice is heard calling the first lady a "big fat gorilla."

"Our country is going in the wrong direction, you'd better be aware of it. And people running around like, oh it'll get better, it'll get better. No, it ain't gone get no better until things change."

Grisham also prodded the students to "call the superintendent and tell her" that "I don't like queers."

"I don't hate them as a person but what they do is wrong, it's an abomination against God," he said. "I don't like being around queers."

Grisham told the Times Daily that he "misspoke in a debate-type situation."

"I have no hatred toward anyone or any group. People that know my heart, they know that."

"Before we do anything, we'll investigate this thoroughly and gather information from other people," she said. "Whatever we do in response to this situation will be dictated by board policy."

Grisham, who also teaches psychology and driver's ed, recently was named "Coach of the Year" by the Times Daily.