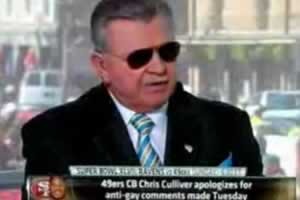 Former Chicago Bears coach and ESPN analyst Mike Ditka has said an openly gay NFL player would not bother him.

The 73-year-old Ditka, who coached the Chicago Bears for 11 years and the New Orleans Saints for 3 years, called being gay "a choice" that needs to be "tolerated."

"I know what my beliefs are," Ditka said on ESPN's SportsCenter. "I believe in my beliefs. I don't question any one else's beliefs. Whether it's religion or anything else. That's why this is America. We have these choices to make. We don't live by the same choices. But, you know, you gotta tolerate other people's choices. It wouldn't bother me at all."