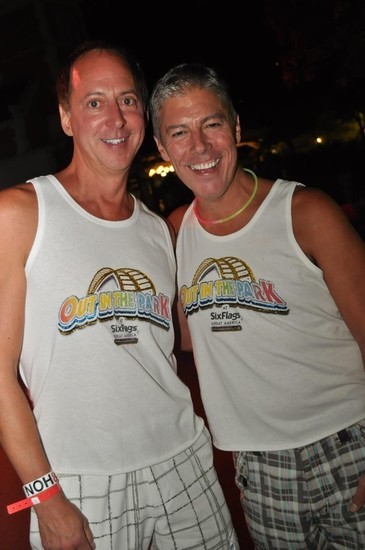 Chicago, IL - Michael Snell and Derrick Sorles of Best Gay Cities and BestGayChicago.com are excited to announce the return of "Out in the Park" at Six Flags Great America on Saturday, Sept. 14. Last September's event drew 3,600 LGBTQ folks and their allies to the amusement park in Gurnee, IL. for a special after-hours event that raised nearly $12,000 for the the Test Positive Aware Network (TPAN), a Chicago-area HIV/AIDS organization.

"We are very excited to be asked to return this year to Six Flags Great America and their excitement in allowing us this unique opportunity to produce such an awesome private event for our community at their park," Sorles said on the event's new website, gaysixflagschicago.com. "We are proud to have another charity this year benefiting from the event."

"Out in the Park" will once again feature local favorite DJ Matthew Haravat spinning in the park's Hometown Square from 9 p.m. until 1 a.m. His music will be piped live throughout the whole park, where all of the rides will be open exclusively to Out in the Park ticket holders for an evening of short lines and good gay fun for one and all. Additionally, the duo is adding more entertainment and a lazer light show in the dance area to attract even those who don't ride rides to come take part in their event. Ticket prices are set at $39, which includes free parking.

In preparation for marketing this year's event, Sorles and Snell are holding a contest challenging local artists to design a prize-worthy poster and postcard for "Out in the Park" 2013. They are looking for a colorful and eye-catching design that portrays the fun and excitement of their unique event to encourage people to buy a ticket, invite their friends and get ready to have a blast.

"Last year, we were on a very tight deadline to get the art together. This year we have more time, so we thought ‘let's hold a contest and see if some creative people can come up with a cool poster idea for us,'" Snell told ChicagoPride.com. "Hopefully, if there is enough interest, we will do this every year."

The competition is open to all interested artists and graphic designers with entries being accepted from individuals, collaborative teams or design firms. Sorles and Snell will choose the top designs and post them on Facebook, where the winner will be chosen by popular vote. Winners will receive $500 and two tickets to "Out in the Park" 2013, valued at $80. Complimentary prizes of $39 tickets to the event will also be awarded to other favorite designs.

The winning artist(s) will have their work appear on 500 posters and 30,000 postcards to be distributed in Chicagoland, Wisconsin and parts of Iowa, Michigan, Minnesota and Indiana as well on ads and banners on several websites, including Facebook. With their names on everything, this will give the artist unbelieveable exposure alongside this growing tradition for Chicago's LGBT community.

"Last year we had about 3,600 people show up and we only had eight weeks to market it," Snell said. "This year we expect 7,000 easily as we'll be marketing the event starting May 1 -- which gives us about four and a half months!"

All interested artists must complete and submit their work for review and judging before 5 p.m. on March 1, 2013. There is no cost to submit an entree and no limit to the number of submissions entered. More information about the contest as well as a complete list of rules and guidelines can be found online.